Electrifying performances are what you can expect at Under Madiba Skies. (Image: I Support Do You)

Nelson Mandela became the first democratically elected president of South Africa in 1994; his inaugural speech, in which he spoke of freedom, the future, reconciliation and renewal, still resonates today.

“It always seems impossible, until it is done,” he said, prompting musicians from South Africa and France to interpret his words in a special performance in which many influences and cultures come together on stage.

This meeting of musical chairs goes by the name of Under Madiba Skies, and they will be performing in Pretoria, Johannesburg, Durban and Cape Town from 29 October to 1 November.

On 29 October, catch them at Alliance Française Pretoria; on 30 October, they are in Johannesburg at Alliance Française Johannesburg; on 31 October they will be at Ikhaya le Langa in Langa in Cape Town; and they finish off their tour in Durban at Rainbow Restaurant. All performances are free, except the final show in Durban, for which tickets are R60.

A MEETING OF DIFFERENT CULTURES

In Under Madiba Skies, French band Gran Kino has come together with a number of South African musicians, including Manelis, Ayanda Nhlangothi, Jitsvinger and Burni Aman, to share their vision of South Africa today.

This collaboration, which began in 2013, has spawned several songs. Whether from Durban, rapping in isiZulu, from Johannesburg singing with a traditional sweetness, or from Cape Town rapping in Afrikaans, the vision is mutual: coming together on one stage, uniting different languages, visions and ideas. Above all, the venture celebrates an endless artistic richness.

The music weaves together traditional songs, rock, hip-hop and acoustic piano and voice. The performers are colourful and embody values of peace and openness to the world.

Under Madiba Skies released a four-track EP in 2013; the first single was called Brand New Day, and is available online.

The artists see Madiba’s inaugural speech as a prophecy and feel honoured to bring his word to listeners around the world. It is also an opportunity to show the world what South Africa has to offer.

Their ideals dovetail with South Africa’s National Development Plan or Vision 2030, which has an aim to seal Africa’s place in the world and bring about nation building through social cohesion.

In 2013, the group successfully toured France with performances at some of the biggest world music festivals in that country, such as Festival Generic and The Worlstock Festival. In 2014, they visited South America.

The first Under Madiba Skies single, Brand New Day, was playlisted on Radio France International and other French radio stations. Songs from the EP were also playlisted on radio stations in Belgium, Germany, Greece, Lebanon, Poland, Italy, Spain and Hong Kong, among other countries.

It seems the collaboration has touched many, with audiences around the globe appreciating the performances:

“I wanted to congratulate you, to thank you, to tell you how much this moment had touched me. My emotions about your performance were so strong, I was not able to do anything the days following your concert.”

“It is this simple message I want to convey to you: through your involvement with a bit of soul, Madiba was in Macon, and the permanence of the soul softens the pain caused by the sad news of his passing. For me, as for many, Madiba remains alive.”

“It was an evening of great splendour and generosity… Your concert was like a bomb of talent: energy, originality, crossroads of music and styles. A true rainbow of musicians and rhythms.” 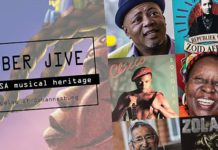