The Durban chapter of the ground-breaking SA Riding for the Disabled Association (SARDA) has strengthened its relationship with the Vodacom Durban July after a R40 000 donation to the charity that offers therapy classes to youngsters with mental and physical challenges.

“It is astounding to see how the therapy offered by SARDA is changing people’s lives,” said Vodacom’s Executive Head of Sales and Marketing in KZN Dean Jooste.

Vodacom donated R30 000 towards the KZN branch of SARDA that operates out of its renovated premises in Shongweni, while Gold Circle contributed a further R10 000.

“The fit between a glamorous social and sporting event like the Vodacom Durban July and the largely unseen work that SARDA does is very strong, because at the centre of both is the unique relationship between man and horse,” Jooste added.

Since being adopted as the official charity of the Vodacom Durban July five years ago, the KZN SARDA chapter has made huge strides (Photo: Dave Macleod, Gameplan Media)Jooste was on hand to assist with a therapy workshop with youngsters from the Browns school, and was struck by the impact that it had on the pupils.

“The physical and psychological benefits are well documented, but most of all the look of sheer joy in the eyes of the boys and girls is what makes this special,” he said.

Since being adopted as the official charity of the Vodacom Durban July five years ago, the KZN SARDA chapter has made huge strides.

It now has a big volunteer base that provide highly trained instructors and assistants to the classes attended by pupils from Browns school, the Open Air Schools, the children’s unit of St Anne’s hospital, Ethembeni school and Westpark School, in addition to a number of individual children.

The single biggest advance at the premises in Shongweni was the recent erection of a massive roof over the training arena that allows them to hold classes that are not weather-dependent, thanks to a timeous Lotto grant.

The SARDA team quickly identified the ongoing and loyal support of individual, corporates and the Vodacom Durban July in particular for their ability to strengthen their resources and expand the number of children they cater for.

“The work SARDA does with these children is life changing,” said Jooste. “Most of these youngsters are experiencing something that we take for granted, and to have horse therapy responsible for that is fantastic.

“I really hope every person supporting the Vodacom Durban July this year understands that they are also in the process supporting this fantastic facility.” 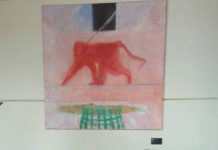 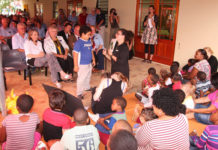 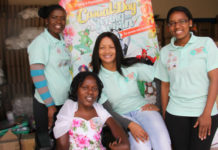 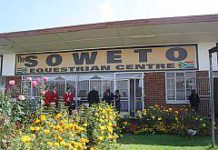 Sharing his love of horses