Nkwinti said the programme had taken on board over 11 000 young people from rural areas around the country and had helped over 4 000 of them to get theoretical training at Further Education and Training colleges.

“We train them so that they can go back to develop their respective rural communities with the skills that they acquire from us, but some of them are being absorbed in urban areas [which is fine],” he said.

National Rural Youth Service Corps recruits celebrate their completion of a seven-week non-military training course at the De Brug Military Base in Bloemfontein (Photo: GCIS)The programme, involving two years of training, was launched in 2011 with an initial 7 900 participants. To date, 4 500 participants have either received or are in the process of completing training in various disciplines, mainly in the construction sector.

Nkwinti, who supports the idea of getting rural schools to teach farming skills to high school learners, said the programme was widely viewed as a success, but required additional resources.

“Our view is that skills development for young people is critical in rebuilding our country. As government, we’ve done a lot in terms of accelerating water and sanitation provision, adequate roads, housing and electrifying households.

“We’ve delivered early childhood development centres, clinics and other basic human rights needs that never existed before in areas such as Muyexe in Limpopo, and now we are moving to other areas in other provinces, where we are also building houses for needy beneficiaries.”

Nkwinti said they still had many areas to get around to in terms of delivering services.

“The pace is slow, but we are pleading with our people to be patient. We are getting there. The country is quite big and resources are very limited.” 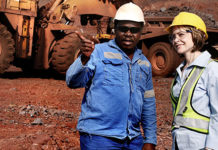