A pair of South Africans determined to see cleaner beaches around the country’s coastlines will embark on a seven-month journey from October 2012 to April 2013 to create awareness about littering and the changes in attitude that citizens should embrace.

The daily plan for Baretta and Howard requires them to start each day of their journey at 6am and walk anything between 18 and 35km before resting for the dayCamilla Howard, the founder of a Cape Town cooking school and Michael Baretta, a manager for branding agency The Creative Counsel, plan to walk along 3 300km of coastline from Alexander Bay near the Namibian border, around the southern tip of the country and all the way up the east coast to Kosi Bay, next to the border with Mozambique.

Trekking for Trash, as their initiative is called, aims to raise awareness among South Africans about the growing problem that is littering.

Before starting Trekking for Trash, the two researched the common reasons for littering and what this means to the South African society. “Litter is so much more than just unsightly,” explained Baretta, adding that it results in some serious environmental, social and economic issues.

“Most notably it perpetuates the broken-window effect in our country.”

The broken-window theory argues that a clean environment that is well maintained is a sign that the area is monitored and that criminal behaviour will not be tolerated. “If we can clean up South Africa, maybe we can reduce crime,” said Baretta. “Fundamentally it’s about an attitude of respect.”

Howard added that litter is something that has always bothered the pair on a personal level, and this is prompting them to make a real difference and to change the attitudes of South Africans, especially young people, towards littering.

TAKING EACH DAY AS IT COMES

The daily plan for Baretta and Howard requires them to start each day of their journey at 6am and walk anything between 18 and 35km before resting for the day. While one carries the litter bin – made of cloth, and can be carried like a backpack to take about 20 litres of trash at a time – the other will be responsible for carrying their food and water supplies for the day.

The objective for each day’s mission is to fill the bin as many times as possible, while identifying the problem areas with regard to littering. The pair also hopes to encourage communities in the different towns they will pass through to make an effort to keep their areas clean.

“It’s very difficult to measure change in perceptions,” said Baretta. “The strongest motivation for us would be to see how many other people we motivate to do something similar to our cause.”

The objective for each day’s mission is to fill the bin as many times as possible, while identifying the problem areas with regard to littering (Photos: Trekking for Trash)They also plan to visit 15 schools along their route, where they will perform a skit with a theme related to littering and recycling. Furthermore they plan to install recycling stations sponsored by Collect-a-Can on the schools’ grounds. The schools will participate in a programme where they will compete for a cash prize that will be given to the one that collects the most cans.

The visit in each town will be marked by the delivery by Howard and Baretta of a letter – signed by authorities at the National Department of Environmental Affairs – to municipal authorities that testifies to the efforts of Trekking for Trash. The letter will serve as a challenge to each municipality to take up the task of cleaning up the environment.

MAKING NOISE FOR A CAUSE

Using social media like Facebook and Twitter, Baretta and Howard expose just how dirty South Africans are by posting pictures of the most littered areas. By geo-tagging areas that are too large for the two of them to manage, the two challenged friends and fans of their initiative to take on the task of gathering volunteers to help clean them up.

On a national level, they are raising funds to support informal waste collectors by providing them with protective gear, reflective outfits, gloves and also the skills to develop their small businesses.

Packaging giant Nampak and Collect-a-Can have collectively formed an organisation called Can Do, which is the headline sponsor for Trekking for Trash. It is funding the maintenance of the social media platforms and providing money to keep Baretta and Howard nourished throughout their journey. Other sponsors include Nokia, sports clothing manufacturer Hi-tec, battery maker Energizer and Vodacom. 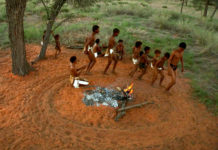 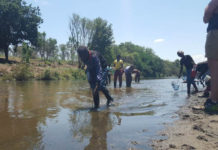 Being green for River Rehab 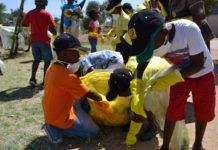 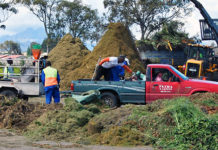 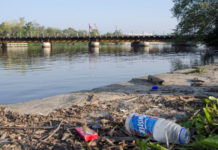 Campaign calls on people to clean up their neighbourhoods