This summer, South Africa is in the grips of the severest drought in 20 years, coupled with one of the harshest heat waves the country has experienced. The towns of Senekal, in Free State, and Aliwal North, in Eastern Cape, for example, have run out of water.

In response, Operation Hydrate was established by good Samaritans from various communities, NGOs, religious groups and companies to play their part in saving lives and easing the suffering of thousands of people.

The initiative hopes to distribute over a million litres of water to the drought stricken Free State and parts of Eastern Cape.

“We have distributed over 350 000 litres of water so far,” said Yaseen Theba, Operation Hydrate’s co-ordinator. “We cannot sit by idly as we watch our fellow South Africans die of thirst. As civil society we have the power to make a difference and help those in need when we unite around a common cause such as this.

“The joy on the faces of those who have been receiving drinking water is remarkable and most humbling. Many have not had water for weeks.”

South Africa’s farming communities have been the hardest hit by the drought and livestock are suffering and dying, while crops are withering.

The portfolio committee on water and sanitation supports Operation Hydrate and views it as a noble initiative that must have the support of society as a whole.

It urges everyone, from individuals to big business, to contribute. “It is only through a commitment to mutual action that the country will overcome the current challenge of water scarcity,” said Mlungisi Johnson, the chairperson of the committee.

In addition, the committee urged all South Africans to recommit to a culture of prudent water use. This recommitment, coupled with vigilance in relation to water leakages, would ensure that South Africa saved water that was currently being lost.

Proudly South African has thanked and applauded all the volunteers and donors involved in Operation Hydrate. It also encouraged businesses and corporates to dig deep to support the relief efforts.

“At times like these we’re called upon to be of service to humanity and to respond to the basic needs of our people,” said chief executive Lesley Sedibe. “Among these are the promises of a better life and the restoration of (the) dignity of our people, which includes a basic human right such as access to water.

“This initiative shows that many South Africans from all walks of life naturally band together to help their fellow countrymen and -women who are in desperate need of assistance. Despite the many challenges we face, Operation Hydrate also shows we are still a people of hope and humanity. Ultimately what unites us is far greater than our differences.”

Mango, the low-cost subsidiary of SAA, has contributed to the initiative by giving water to the value of R500 000 for distribution through the initiative.

“There is no question about the strength of the South African character and as an airline for all the people, Mango was inspired to participate in our usual hands-on fashion and is purchasing water from a percentage of ticket sales this week.”

Have you played your part to make South Africa better for all? Share your story with us. 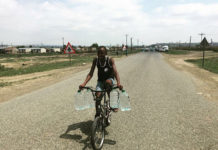