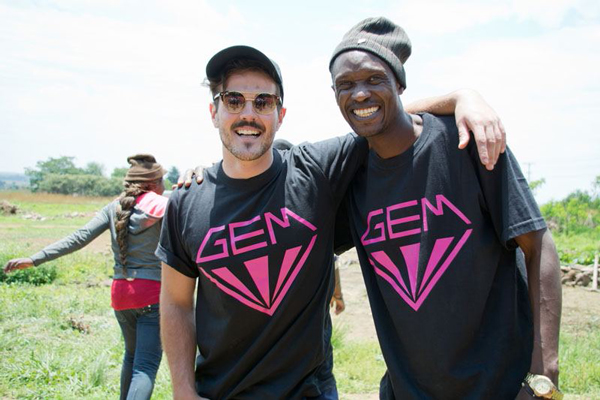 GEM volunteers not only help uplift the communities for which they work but also earn Gems that can be redeemed for airtime, data, pre-paid electricity and movie tickets. (Image: GEM Project)

GEM Project, an app that links volunteers to good causes, has partnered with Play Your Part in charitable events that aim to uplift disadvantaged communities.

GEM – which stands for Go the Extra Mile – has the potential to curb unemployment. In many cases, volunteers are unemployed people who spend their time contributing to their communities. And with GEM’s reward system, the volunteers are guaranteed to earn something for their good deeds.

When volunteers complete a good deed, they are eligible to receive a reward via the app, which is called a Gem. These Gems can be redeemed for products such as airtime, data, pre-paid electricity and even movie tickets. But co-founder David Shields makes it clear that Gems are not a means of financial support. “Rewards are to be seen as a gesture of goodwill, not payment.”

The GEM app is a call for all South Africans to become active citizens and play their part in improving the lives of fellow South Africans, says Brand South Africa’s general manager of marketing, Sithembile Ntombela. “We hope that the nation will continue to contribute to positive change because a nation of people who care deeply for one another, and the environment in which they live, is beneficial for everyone.”

To find out how you can volunteer for one of GEM’s projects, check out the GEM website. Find out more about GEM’s activities below.

12 May 2016 – Few people can resist the cuteness of a puppy, which may be why volunteers thronged to GEM’s activation at Ark Animal Centre, where dog lovers from around Johannesburg spent time caring for the lovable canines.

3 September 2015 – GEM Project, the app that gets people to volunteer for good causes, spread their footprint across Gauteng this Mandela Day. With a presence at 10 events, the app got South Africans giving more of their time and energy.

20 July 2016 – On Mandela Day this year, volunteers from across Johannesburg joined GEM and Play Your Part to give Sparrow Schools a little face-lift and a burst of fresh colour.

13 May 2016 – A children’s home in the heart of Johannesburg that offers refuge for children infected or affected by HIV/Aids is getting a helping hand from a group running a mobile app for volunteers.

VOLUNTEERS BRING A SMILE TO ETHEMBENI

4 February 2016 – GEM volunteers spent some time at Ethembeni Children’s Home in Doornfontein, helping to clean the home and spending quality play hours with the babies and toddlers.

CHILDREN THE FOCUS FOR JANUARY ACTIVATIONS

13 January 2016 – Make 2016 your year for doing something for others – and start as you mean to carry on. Already there are several volunteering opportunities planned at which you can earn GEMs for playing your part.

29 October 2015 – Play Your Part was at Akani Primary School in Diepsloot for a clean-up campaign that taught pupils about the importance of keeping their environment free of litter.

DIEPSLOOT SCHOOL GETS A SPRING CLEAN

27 October 2015 – When teaching children, repetition is important, the principal of Akani Primary School stressed during a Play Your Part clean-up. Pupils were reminded of the importance of keeping their environment free of litter.

VOLUNTEERS LEND A HAND AT REFILWE

27 November 2015 – Every Saturday, children from the townships around Lanseria, in Gauteng, can spend the day at the Refilwe Community Project, learning and having fun. Through Play Your Part partner GEM, a group of volunteers helped to make and serve the food, and with the workshops and play time.

EARN GEMS BY PLAYING YOUR PART FOR MADIBA

10 July 2015 – To mark Mandela Month, Brand South Africa has partnered with the exciting new Gem project, an online platform where people get real rewards for their good deeds. The partnership forms part of the organisation’s Play Your Part for Madiba campaign, launched at the Nelson Mandela Foundation today.