Nation building and social cohesion are some of the outcomes of South Africa’s National Development Plan or Vision 2030 – and it all comes together when ordinary people put in a little effort.

Nine friends from Khayelitsha, in Cape Town, founded Dine With Khayelitsha, a monthly dinner hosted in Site C, Khayelitsha, which brings together people of different races and social classes. The aim is to have frank conversations about social issues and break down racial boundaries.

“We’re just a bunch of kids trying to change the hood,” Mpumelelo Sefalane, a co-founder, told Redbull Amaphiko. “That’s what we’re doing with Dine With Khayelitsha.

“When white people come to the township, they usually come for charity work or as tourists. We want to change that and create a space where they can come and we can discuss real issues, and show them what township life is really about.”

The group of friends host dinners at nine houses on the first Friday of each month. Each house has its own theme, anything from entrepreneurship and leadership to land reform. The programme is run according to the dinner’s menu.

Learn about Dine With Khayelitsha:

“During the first course we’ll introduce everyone to each other and have a little ice-breaker to calm everyone’s nerves. For the main course, we discuss the topic of the night,” Sefalane said.

It’s not all talk and no show though.

“We want people to actually implement what we’ve been discussing throughout the night. So during dessert we get everyone to share how they’re going to change whatever we’ve been talking about.”

The dinners also offer isiXhosa classes thanks to a partnership with social enterprise Ubuntu Bridge.

Everything from the food consumed to the entertainment is sourced from local suppliers. The food is cooked by aspiring chefs in Khayelitsha and after the dinner, guests head to Vintage Lounge, a local night spot, to wind down.

Sefalane and his team want to break out of South Africa and take the concept of Dine With across the continent and all over the world. “We want to take this internationally – whether it’s London or Abu Dhabi. That’s our biggest vision.”

Are you playing your part to help improve the lives of the people around you or the environment? Do you know of anyone who has gone out of their way to help improve South Africa and its people?

If so, submit your story or video to our website and let us know what you are doing to improve the country for all. 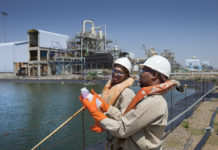