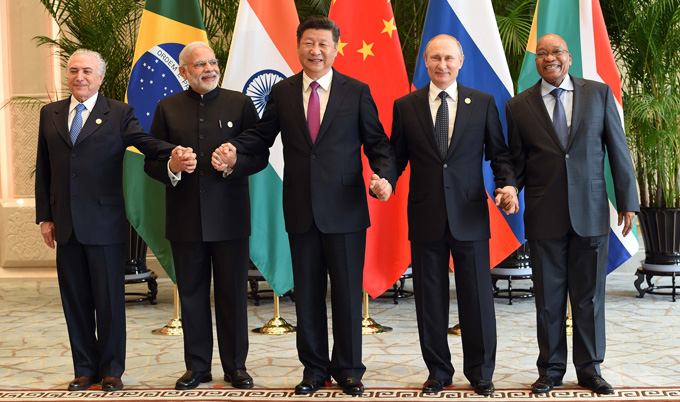 Global political, security, economic and governance issues was the focus of discussions between leaders of the BRICS grouping of major emerging markets – Brazil, Russia, India, China and South Africa – held on the margins of the Group of 20 Summit in Chinese city of Hangzhou on 4 September 2016.

To further strengthen the partnership, the BRICS leaders reaffirmed that cooperation would be based on principles of openness, solidarity, equality, mutual understanding, inclusiveness and mutually beneficial cooperation between them.

Access to international law courts would improve the state of developing economies and the citizenry. Corruption, illicit cross-border financial-flows, and ill-gotten wealth derived from illegal activities are challenges that can best be tackled through enhanced cooperation between G20 countries.

Macroeconomic policy coordination between G20 member countries would ensure the benefits of any economic recovery would be sustainable and more equitably shared. Focused national growth strategies would only achieve strong, sustainable, balanced and inclusive growth if G20 members worked together.

The G20 Blueprint on Innovative Growth could be a driver for mid and long term growth and sustainable development. Its recognition of the importance of innovation in growth was welcomed.

New trade protectionist policies being implemented across the globe was a concern to the BRICS leadership. Strengthening the role and negotiation functions of the World Trade Organisation (WTO) would allow the regulatory body to facilitate market inter-linkages and an inclusive, rules-based and open world economy.

BRICS leaders stressed the importance of the WTO adherence to a rule-based, open, transparent, non-discriminatory and inclusive global trading system. However they believe the WTO needs to put development at the centre of its policies.

Implementation of the outcomes reached by trade ministries in Bali and Nairobi would go a long way to creating a more equitable global economy. The BRICS governments have called for early ratification and enforcement of the Trade Facilitation Agreement.

International Monetary Fund (IMF) allocation quotas did not reflect present-day global economic realities. BRICS leaders are calling on the IMF to review the way resources are distributed, and increase their funding reserves. Direction from G20 members could ensure a fairer reflection of emerging and developing economies.

Completion of the 15th General Review of Quotas – including a new quota formula – by the 2017 annual meeting would create a more effective and efficient global economic architecture, this would create the environment for resilient growth.

BRICS leaders also congratulated India for the speed of its implementation and the expansion of the BRICS cooperation agenda. As chair of the grouping, India will host the upcoming 8th BRICS summit in Goa between 15-16 October.

Progress in the implementation of the Strategy for BRICS Economic Partnership underscored the importance of the 2020 BRICS Roadmap on Trade, Economic and Investment Cooperation. This has strengthened trade, business and tourism ties between BRICS nations.

India has been at the forefront of strengthening of these ties through the ongoing series of people-to-people exchanges across the provinces and cities of India.

The New Development Bank’s approval of its first set of loans also drew praise from the assembled leaders. The first loans as well as the successful issuance of the Bank’s first funded programmes in the renewable and green energy sectors. Leaders applauded the Bank’s potential as a source for bridging finance for infrastructure projects.

Universal access to energy and energy security are critical to shared prosperity and the future of the planet. They acknowledged the importance of affordable, clean and renewable energy to sustainable development.

The success of the G20 Hangzhou Summit earned the Chinese government plaudits from the BRICS leadership. They applauded the emphasis placed on a development agenda and encouraged all G20 members to strengthen macroeconomic cooperation, promote innovation, robust and sustainable trade and investment growth.

BRICS governments reaffirmed their commitment to the 2030 Agenda for Sustainable Development, the Addis Ababa Action Agenda on Financing for Development and the Paris Agreement on Climate Change. BRICS leaders expect that the agenda in China would encourage a new vison of inclusive growth from G20 governments. In this regard, they welcomed the G20 Action Plan on the 2030 Agenda for Sustainable Development and the G20 Initiative on Supporting Industrialisation in Africa and Least Developed Countries.

Cooperation and ongoing dialogue with other emerging market economies would be strengthened. Fostering innovation between interconnected, inclusive and invigorated usher in a new era of global growth and sustainable development.

International cooperation would blunt the threat of international terrorism and the risk of destabilization these heinous acts represent. BRICS leaders united to condemn terrorist violence that continue to disrupt global peace and security and undermine social and economic confidence.

In expressing sympathy and support to innocent victims, they reiterated their commitment to fight terrorism in all its forms and manifestations. There can be no justification for terror or violence whether based on ideology, religion, politics, race or ethnic identity. They emphasised that a united effort guided by international law, with the United Nations playing a central role, was needed to combat terrorism.