Episode 13 of Play Your Part features Maimane Alfred Phiri, Kass Naidoo and Pamela K Bess. Here’s how you can get involved with them and their initiatives.

Born and bred in Alexandra in Johannesburg, Maimane Phiri started a social responsibility project in 2001 to involve youngsters in sports such as football.

The former football star is one of the guests featured on episode 13 of the Play Your Part TV series, which airs on Saturday, 9 December 2017 at 18:00 on SABC2.

Here’s how you can get involved with Phiri’s initiative, as well as with the other guests on this week’s episode:

Phiri is the founder of the Maimane Alfred Phiri Games, or MAP Games, as well as the Maimane Alex Development Foundation which hosts the games, an annual winter football tournament. For Women’s Month, the foundation also focused on other sport codes such as netball, athletics and basketball.

Naidoo publishes news of women in sport and in South Africa. Her online initiative, gsport4girls, celebrates women in sport by hosting an annual awards.

Play Your Part is broadcast at 18:00 on Saturdays on SABC2.

To get involved in playing your part in South Africa:

Tell us how you Play Your Part through our social media channels: 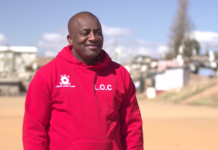