Brand South Africa is inviting young and old in North West to engage with the Play Your Part Cube in the latest edition of its roadshow. The aim is for people to become active citizens within their communities.

Attendees are invited to interact with the PYP Cube and will be encouraged to participate in education and skills development within their communities.

The initiative is a partnership between Brand South Africa and One Day Leader, a TV programme on the South African Broadcasting Corporation which promotes leadership and entrepreneurship within society.

Private enterprise has always been involved with the PYP Roadshow and the North West edition will not be any different.

Volkswagen general manager in Klerksdorp, Clinton Bezuidenhout, is part of a panel discussion. Other businesspeople involved are entrepreneur and chief executive of the Wesvaal Chamber of Business, Sanele Makinane; Professor Du Plessis from the NWU School of Governance; Delmarie Van Zyl of the Potch Business Chamber; and social entrepreneur, Neeta Morar.

The event is a continuation of the PYP Roadshow from last year where actor and singer Zola7; businesswoman Phindi Gule and her partner, Kevin Burley; businesswoman Carol Bouwer; One Day Leader ambassadors, and DJ Sbu’s Leadership 2020 inspired people across six provinces.

The Cube connected citizens to social media platforms, encouraged conversations on active citizenship and got people to pledge their time and skills to make a difference.

North West is a mining province with more than half of its gross domestic product generated from the sector. It also provides jobs for a quarter of the province’s workforce. The main minerals mined are gold, uranium, platinum and diamonds.

The province also has a healthy agricultural sector. Farmers in the north-western parts of the province predominantly raise livestock while the south-eastern farmers grow crops such as maize, sunflowers, tobacco, cotton and citrus fruits.

People can engage with the PYP Cube, Brand South Africa and its partners on Twitter using #PYPCube during the session. 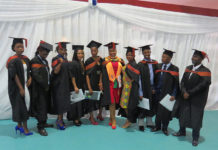 A first for Africa: graduating with an indigenous knowledge degree