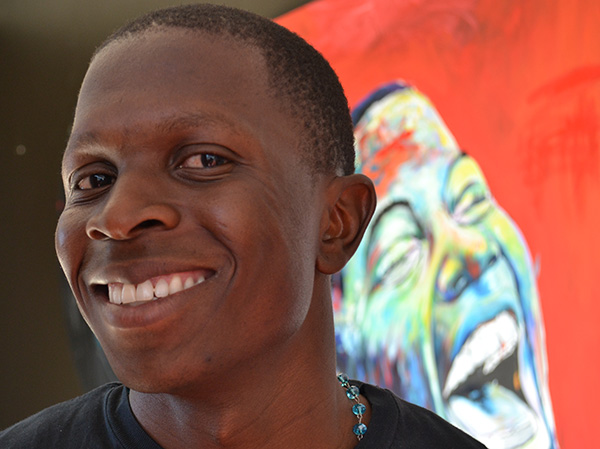 Artist Nelson Makamo’s subjects have all come from impoverished communities but they have never seen his works. Now, Makamo is looking to take his art to primary schools around the country by painting murals on its walls. (Image: Shamin Chibba)

Artists bring beauty to the world. Yet, most people cannot afford or don’t have access to such items. It is for this reason that South Africa’s freshest painter, Nelson Makamo, is taking his work to less privileged communities in South Africa.

Makamo is embarking on a countrywide school mural project that will not only bring beauty to impoverished schools, but will also improve facilities. “Before we plan a mural we have to do something else for the school,” said Makamo. “The mural will remind us that we came into a school without a football ground and worked together to build it a football ground.”

Makamo is planning to help one rural school in each province. “When you drive around South Africa and look at the schools, there’s nothing with which you can identify a school from a distance. You find the schools are struggling.”

Makamo came up with the idea after he realised influential individuals, like himself, have the power to help poor communities. “I was one of those people who used to say the government doesn’t do this, the government doesn’t do that. But in most cases it is targeted to me. As a normal citizen, if I have the ability to do something why don’t I do it. 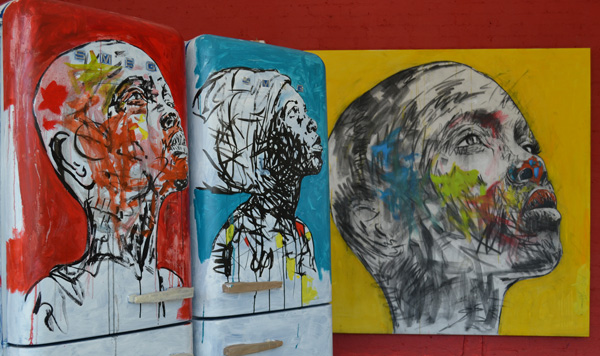 Makamo’s works have been collected by the likes of British singer Annie Lennox and fashion designer Giorgio Armani, but it is the work he wants to take to rural communities that he is most excited about. (Image: Shamin Chibba)

“If children go to school barefoot or cold they will not be able to concentrate. So I realised I have to start adopting schools.”

Makamo said influential people should help improve the lives of others and set an example by doing so. “The more your profile grows the more you can influence others to be a part of it.”

Though there are a few who are interested in financially supporting the project, the artist is looking to fund it from his own pocket where possible.

Makamo grew up in Modimolle, a small town in Limpopo, and its people have been the inspiration for his art since he started. Most of his work depicts young boys doing ordinary things: playing, laughing, walking, or looking curious or ponderous.

He doesn’t boast about wealthy people having his work in their private collections, even though they include British singer Annie Lennox and fashion designer Giorgio Armani. But he speaks enthusiastically about creating art for the communities he relates to.

“In any interview that I had, I never proudly said so and so has my work because I think it’s unfair to those who would truly connect with the work beyond the price tag. You may find that the work is not even hanging in their house that it’s in storage. Every now and then I try to see if I can make it possible for the ordinary person to view my work.”

Makamo’s studio manager, Matsela Moshokoa, said the mural project will give poorer communities an opportunity to view his work.

“It will highlight the plight of our primary schools. Especially in rural areas.”

Besides beautifying schools, the murals will provide a space where learners can play and have their lunch, said Moshokoa.

Children will relate to it because it is created by an artist who is one of them. “It’s from a person that once looked like them, that comes from the same background, and they can see themselves in him as much as he can see himself in the kids.”

Have you or anyone you know done anything to uplift your community? If so, share your story with us.

If you have a story to tell, be it your own or that of an organisation or initiative dear to you, submit your story or video to our website and tell us how South Africa is playing a part to build a better life for all.