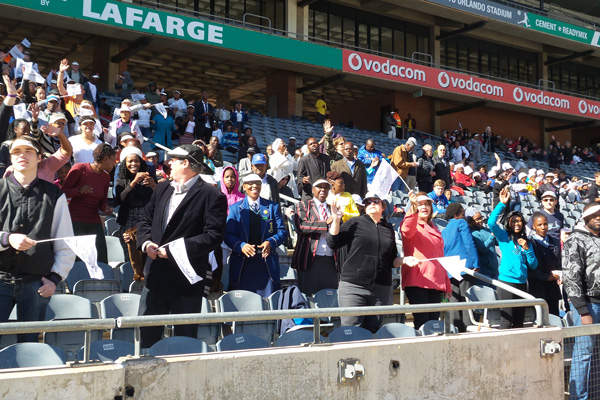 South Africans of all colours marched to Orlando Stadium in Soweto, joining the call of the South African Council of Churches for us to all work towards making the country the best it can be.

Hundreds marched from Madibane High School to Orlando Stadium in Soweto to mark 40 years since the Soweto Uprising.

This year marks the 40th anniversary of the uprising, when, on 16 June 1976, thousands of school children protested the introduction of Afrikaans as the language of teaching.

This year’s march, organised by the South African Council of Churches (SACC), was held on 11 June. It brought together church representatives from Palestine, Colombia, Burundi, Nigeria, Sudan, South Sudan and the Democratic Republic of the Congo.

The SACC called on South Africans to “pray and work for a South Africa of promise – a reconciled, equitable and sustainable society, free of racial, gender, tribal and xenophobic prejudices”.

They said we must work to free South Africa from corruption, socioeconomic discrimination and violence. They called for “each child born to grow to its God-given potential”.

World Council of Churches general secretary, Reverend Olav Fykse Tveit, said the ideal South Africa is still to come. “We are with you today acknowledging that the walk towards the South Africa you hoped for and still pray for is not finished.

“Together we also see a new sign of hope. We see today that there are new ways forward toward what you all can share as a land of freedom, trust, justice and peace. The process of reconciliation has to continue – and we see that it can continue and include many more.”

“Our life is a pilgrimage of justice and peace with one another and God in our common home, in this world. We search for transformation of ourselves and of the world in which we live.”

The SACC published a press statement to mark Youth Day, saying future generations would use history to their benefit.