Carla Viktor, 25, will be competing for the crown of Miss Earth in Austria. The pageant winner is to be crowned on 5 December 2015. (Images: Miss Earth South Africa)

Well wishes are pouring in for Carla Viktor, the 2015 Miss Earth South Africa, who will soon be competing for the Miss Earth crown, the international beauty with a cause pageant.

Some 92 contests from around the world will compete in the 2015 Miss Earth pageant. They will gather on 18 November in celebration of Miss Earth’s Crystal Year in Eco-Friendly in Vienna, Austria to promote environmental awareness. Viktor, who grew up in Hartbeespoort in North West, and her fellow competitors will focus on climate change through the 5Rs, namely: re-think, reduce, reuse, recycle and respect.

The finals of this 15th annual event will take place on 5 December in Vienna. The host country is home to the Austrian alps, which cover 62% of Austria’s total land area. It is also on this continent that COP21 will take place in Paris, at the same time.

Watch why Carla Viktor is an environmental warrior:

Miss Earth South Africa spearheaded a global challenge to the Miss Earth contestants around the world, the local group said. The South African office launched the #BigO2Challenge internationally ahead of the United Nations COP21 conference.

This initiative started as a local semi-finalist campaign by Carla Viktor, Milanie Cilliers and Celetia Reynders. Through the tree-planting campaign, individuals, corporates, schools, and the general public were encouraged to get involved and plant trees, with the message: No Trees = No Humans.

Miss Earth South 2015 Africa Carla Viktor (in middle) lends a hand to plant trees to show her care for Earth.

Ahead of the biggest climate change conference to date, the United Nations Framework Convention on Climate Change, COP21, Miss Earth South Africa challenged Miss Earth ambassadors around the world to plant 21 trees on 9 November, marking 21 days before the opening session of the conference.

“Climate change will be the biggest challenge we face in our lifetimes,” said Catherine Constantinides, the executive director of Miss Earth South Africa and a Play Your Part ambassador, “and it’s up to us to realise that we will be the catalysts for change that will push our countries towards a greener tomorrow. Planting a tree might seem like a simple act, but in effect it’s about being part of a global movement to secure a future for the generations to come.”

Miss Earth South Africa 2015 Carla Viktor says deforestation can be combated by planting trees and building awareness about the environment.

Potchefstroom Municipality in North West pledged to plant 21 trees, as did the George Campus of Nelson Mandela Metropolitan University, and Kuilsrivier and Durbanville in Cape Town, all in Western Cape. “Not only does (the challenge) combat deforestation, it creates a sense of active participation and raises much needed awareness for this important cause,” Viktor said.

Thousands of trees were planted in one day in over 40 countries for the #MissEarth2015 #BigO2Challenge! pic.twitter.com/SyPBv7uHNo

Having won three consecutive gold awards for National Costume, Sonwabile Ndamase of Vukani Fashions was again asked to produce a unique garment that expressed what it was to be South African. Ndamase, who is a Play Your Part ambassador, said his objective had been to create the vision Viktor had of what it meant to be South African.

Her wardrobe was styled by designer Vohni Muthubi. Muthubi grew up in Venda in northern Limpopo.

“I want to create a range that is elegant and fun, that expresses youth and appeal, and that is uniquely Miss Earth South Africa, Carla Viktor,” said Muthubi. “This opportunity presents me with an organic opportunity to create something natural, with an environmental message.”

Viktor is ready to champion the Earth with a stamp of approval from Minister Edna Molewa of the Department of Environmental Affairs. “Through your international work, you continue to make our country proud. I wish you success in the future and thank you for partnering with government and business, to make a better world,” Molewa said.

Commentators on social media also rooted for Viktor ahead of the international competition:

You’re going to rock it @missearth_sa @carlaviktor Have a blast and know we’re behind you every step of the way! X https://t.co/HXGeeOKfW9

To learn more about Carla Viktor, read her biography here. 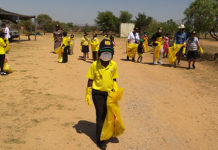 Diepsloot school gets a spring clean 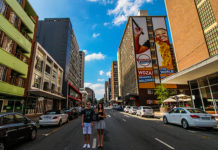 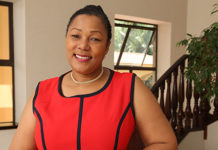