A hip hop dance choreographer from Port Elizabeth says his mother encouraging him to start his own crew helped him overcome his depression several years ago. To celebrate Youth Month, Junior Ferreira shares how his rookie dance crew’s hard work paid off and led them to represent South Africa in international competitions.

Giving up is no option

“Never give up, legend,” were the words of advice from his mother, Marian,
that drove Junior Ferreira to take up dancing again. In 2009, the talented 20-year-
old had failed to make the cut at a local dance academy and was ready to give up
his dream of becoming a professional dancer.

“I had just left a dance academy and decided to stop dancing, because I never
made it to be a senior crew member of that academy,” Ferreira says.

“My mother – who is now my manager – encouraged me to start my own dance
crew because I was going through some depression issues. She called a few
of my friends and told us to start our own crew. She even said she would pay for our
clothes and the rest of our financial expenses.

“Our crew was small. Nobody knew anything about us or what we were about.
There were big crews in Port Elizabeth who were already making names and going
places.”

Despite being the underdogs, Ferreira’s group – named PE’s Finest Dance Crew –
worked hard, and it paid off. Since they entered the South African Hip Hop Dance
Championships in 2013, they have been crowned South African representatives at
the international hip hop showcase in America. 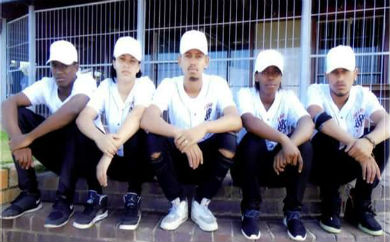 The PE’s Finest Dance Crew made their community proud when they entered the South African Hip Hop Dance Championships since 2013 and qualified to compete internationally in America. (Image: Supplied.)

In 2013, PE’s Finest got a bronze medal in the national competition and in 2014
they received gold, which gave them an opportunity to compete in the World Hip
Hop Dance Championships, with dancers from more than 50 countries, in Las Vegas.

In 2015, they won silver at the national championships and they took off to
America to compete in the international competition, this time in San Diego.
Ferreira says they used the opportunity to tour around southern California and took
part in workshops. This gave them an opportunity to teach foreign participants
about South African local dance styles – the kwaito and sbujwa.

On Youth Day this year, PE’s Finest Dance Crew gives a performance at
an event organised by the Nelson Mandela Bay Municipality in Port Elizabeth. It was
posted on their Facebook page.

There is a business lesson to be learned from PE’s Finest’s early days. Like any
business start-up they faced challenges. “We struggled to get performances, clothes
and exposure in the beginning. For years we would dance in the streets, at local
shops, for charities and fundraisers.”

Ferreira says he can still see the impact they make when dancing in streets.
“There are children wanting to change their lifestyles to become dancers.

“Some teenagers come to me crying that they don’t want to smoke or drink
(alcohol) any more. They want to put food on the table for their families,” he says.
Dancing can be made a career, he adds.

“We change people’s view on life and try to inspire them to do something
different. You don’t have to be a gangster or thief to get money and help feed your
family.” 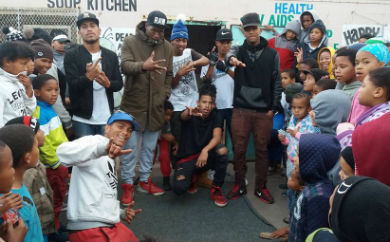 The dance crew started a programme in which they mentor others in various communities. They work on instilling discipline and a positive attitude in young people, through dancing. (Image: PE’s Finest Dance Crew, Facebook)

The dance styles they practice include hip hop, contemporary, pantsula, krump,
popping, traditional Xhosa and Zulu. Ferreira says after their experience in America,
they started a development programme last year.

Participants learn choreography and are mentored by older and more seasoned
dancers. They are taught “how to behave around an audience, stage etiquette,
respect, and the importance of discipline”.

“We go to different communities to teach dance classes and form groups in
every dance community. We are currently busy with Helenvale.”

Dance classes usually cost R20 but they often don’t charge a fee in some of the
region’s poorer communities. “We uplift our community through various dance and
arts projects by getting our people involved in fitness and training, giving everybody
a platform to showcase their talent and to take it even further.”

Among Ferreira’s achievements since resuming his dance career are first and
second prize at the Township Dance Competition this year at the Opera House in
Central, Port Elizabeth. He has also been awarded Best Choreographer in the
Eastern Cape and Most Promising Male Dancer, both from annual Shukuma Dance &
Drama Festival in Port Elizabeth.

The reason he wakes up

Ferreira’s diploma in business management is his back-up plan, but dance is his
career. “It’s my passion and literally the reason I wake up every morning. I can’t
picture myself doing anything besides dance.”

A career in dance, like any art, holds no guarantees. Away from the applause it is hard work, often with little reward. “From the hours of rehearsals, doing fitness training, making sure everybody is synchronized, making our own music, to getting our transport to attend events – it’s hard work,” he says.

“But with passion, drive and commitment it’s not impossible.”