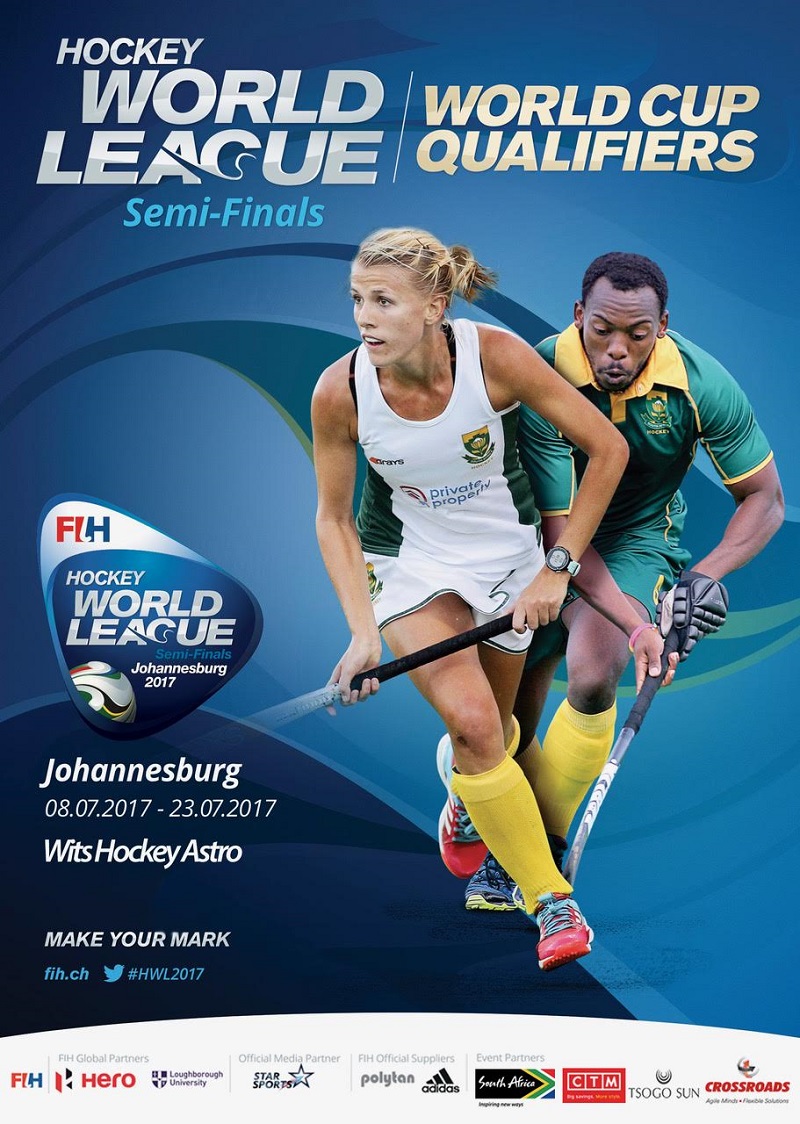 This important qualifying tournament that will determine which teams compete at the World Cup and the Olympics, is being held at the University of Witwatersrand (Wits) until 23 July 2017.

Brand South Africa/Play Your Part (PYP) is an event partner of the tournament, with the country’s men’s national side selected as PYP ambassadors.

The South African teams will be looking to use their home team advantage to qualify for the 2018 World Cup; the women’s tournament will be held in London and the men’s in India.

The women’s team opened their tournament on 8 July against formidable India – ranked 12th to South Africa’s 13th in the FIH world rankings. The match ended in a tenacious 0 – 0 draw, with both teams giving as good as they got. However, the opening game featured stellar performances from South African forwards Tarryn Glasby and Sulette Damons.

A third-quarter goal by Stephanie Baxter would have put South Africa ahead, but was ultimately disallowed because of interference.

The women’s team will meet reigning Hockey Champions Trophy champions Argentina next, on 12 July, and then Chile and USA, on 14 and 16 July respectively, with hopes to reach the quarter-finals, starting on 18 July.

Captain Nicolene Terblanche told SuperSport that while the team was confident of reaching the quarter-finals, she admitted competition was tough. “We played three warm-up matches against England and Japan and there are a lot of positives we can take out of those games… [We’re] looking ahead with this tournament and it is important for South Africa’s hockey’s future.”

On 9 July, the South African men’s team played Ireland, with both teams evenly poised throughout the game. Ultimately, though, following some handling errors and ill-discipline, the home team lost 2 – 0 to the Irish.

Stand-out South African players in the game included Austin Smith’s hard work off the penalty corners that had the Irish defence on the backfoot during the second quarter.

The men will hope to improve their performance in their remaining group games against Germany on 13 July, Egypt on 15 July and Belgium on 17 July. The quarter-finals begin on 19 July.

Men’s coach Fabian Gregory reiterated the team’s strengths going forward in the tournament, saying fans could expect great things from the team. He singled out South African players Smith and Matthew Guise-Brown as two world-class flickers who had the ability to turn the tide of a game.

Other highlights from the tournament so far

Ranked fifth in the world, Belgium’s men’s team went on an epic scoring run against Egypt in the opening match on 9 July. The final score was 10 – 0 to Belgium, with two goals by striker Tom Boon. The Belgians continued their blazing streak with another high-scoring game against the Irish on 11 July, scoring six goals to Ireland’s two.

The sixth-ranked American women’s team beat India 4 – 1 on 10 July, while a riveting 2-all draw between the women’s German and Irish teams was the tightest contest of the tournament so far.

All games will be broadcast on SuperSport, and fans can catch all the highlights and match reports on the FIH website.