Anne Frank was an inspiration to Nelson Mandela during his imprisonment on Robben Island. In celebration of Mandela Month, see this video where Mandela shares how the experience of a young Jewish girl gave him hope and encouragement. 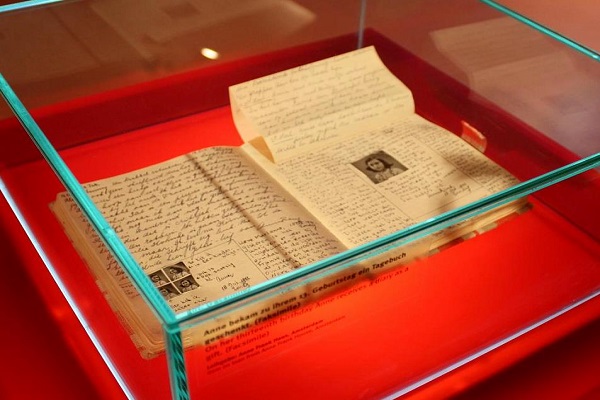 Anne Frank and seven others were in hiding in the secret annex on the Prinsengracht 263 in Amsterdam. It’s become the Anne Frank House, a museum that commemorates her life. (Image: Wikipedia)

In an interview conducted shortly after he was released, Nelson Mandela told Dutch filmmakers that Anne Frank had been his inspiration. He drew courage from her book, The Diary of a Young Girl as she faced injustice during the turbulent World War II.

Mandela is often remembered as a reader, an analyst and a man who never stood still in his thinking. He had read Anne’s posthumous diary before going to prison, but when he read it behind bars again, he saw the work differently. He said that he never lost hope in returning as a free man [from Robben Island] because he knew he could follow in the footsteps of great fighters for human rights like Anne.

“Where there’s hope, there’s life. It fills us with fresh courage and makes us strong again.” ― Anne Frank, The Diary of a Young Girl

Anne died at the Bergen-Belsen Concentration Camp in February or March 1945, before the camp was liberated. She was just 15. Her diary, which she began writing while she was in hiding with her family, was found by her father, Otto, and published in 1947.

During the Nazi occupation of the Netherlands, the Jewish Frank family hid in a secret annex of Otto’s manufacturing business. Sharing the space with two other families, Anne used her diary to write about the world she was not able to enjoy any longer.

Watch this interview from the Anne Frank House:

Watch Tobey Krafft give a tour of The Secret Annex here:

This year the Mandela Month campaign focuses on education and literacy, food security, shelter and the environment. International Mandela Day is celebrated on Mandela’s birthday, 18 July. South Africans and international supporters are called to take action and inspire change throughout the month in commemoration of Mandela’s life.