Over two weeks, a worldwide audience of more than 30 million will have to navigate wall-to-wall sport action, and for any patriotic South African sport fan, it’s vital to have the all the details of when athletes from the national team are featured.

Here is a guide to important Olympic events featuring participants from Team South Africa at Rio 2016. You can also check out the South African athletes’ social media profiles to stay up to date with their preparations and send them some good luck.

Times and events are subject to change. Consult the official Rio Olympics 2016 website or the South African Sports Confederation and Olympic Committee (Sascoc) website for more details about events and participants.

You can follow all the South African Olympic action on Sascoc’s social media platforms:

The Games may not be officially under way yet, but the pool games for men’s and women’s football begin before the opening ceremony.

Banyana Banyana play their first game against Sweden at 18:00 on 3 August, while the men’s team play hosts Brazil on 4 August at 12:00.

See the dates below for the times of the remaining games.

The good news is that South Africa will feature early in the extended alphabetical team presentation, known traditionally as the Parade of Nations, as it is custom to use the host’s official language to determine the order. South Africa in Brazilian Portuguese is Africa do Sol, so the team will follow Greece – as originators of the Olympic Games – and Afghanistan.Keep a look out for Van Niekerk as the team flag-bearer and what the athletes will be wearing.

The part I love most about SA ! pic.twitter.com/TEA9FX59dJ

Not everyday that you get 3 National Champions on the podium in SA. #SomethingSpecial Well done @KimLeCourt pic.twitter.com/XdqwJY0rTD

Overwhelmed by all the lovely messages I’ve received! Grateful for all the love! For sure I will heal fast with all this support ? #ThankYou pic.twitter.com/NhX0i24RU4

vJulia Vincent is only the second South African to participate in an Olympic diving event. Vincent features in the 3m springboard competition

Here are the champs!

The #Gamecocks earn the program’s 3rd SEC Title and first since 2011. #ForeverToThee pic.twitter.com/m7K8e17tyC

17:00-21:00: Open water canoeing, featuring London 2012 bronze medallist Bridgitte Hartley competing in the Women’s K-1 500m. Hartley was named the best female paddler in the world in 2015, so chances are good she can improve on her London success this year.

03:00-05:00: Swimming. Men’s 200m butterfly semi-final, possibly featuring Chad le Clos and the US’s Michael Phelps rematch from London 2012. Also on the cards: the 100m backstroke final and 200m freestyle final; both could feature South African swimmers16:00-22:00: Sevens rugby. Pool matches featuring the Blitzbokke against Spain and France. The team takes on Australia on 10 August at 16:00 to battle for a place in the quarter-finals later in the day and then the final games on 11 August, from 16:00

Hard at work again today are the #Blitzboks#bringtheheat@speckmagic11@Seabelo_Senatla@Rio2016_en#teamSArisepic.twitter.com/5OcPdvptjY

13:00-22:00: Badminton. Jacob Maliekal tries to shuttlecock his way through the heats to earn a place in the playoffs later in the day. Heats are from 11-13 August, with the quarter-finals and semis later in the week. The men’s singles final is on 20 August.

Congrats @JacobMaliekal on making South Africa so proud! It was an honour having you on #TopBilling! #badminton pic.twitter.com/TZgAVLBN6O

12:00-21:00: Golf. The four-day men’s competition starts, with South Africans Brandon Stone and Jaco van Zyl participating. This is first time golf has been included in the Olympic Games since 1904

In almost 12hrs my first #FinalSeries begins. Beyond excited I must be honest, not sure how I’m going to sleep tonight ?#TurkishAirlinesOpen pic.twitter.com/vujrMTbBX4

The face says it all #press pic.twitter.com/mJn2qAt0jj

Women’s football. Quarter-finals03:00-06:00: Swimming. Brad Tandy, Douglas Erasmus and Chad le Clos in action in the semi-finals and finals of their respective events14:00-18:00: Athletics gets into full swing today, with South Africans Dominique Scott in the women’s 10km track event and Reinhardt van Rensburg in the 800m heats. Van Rensburg is a 2016 African Championships bronze medallist. Scott is coming off a successful two years in the United States, running for the University of Arkansas. She is the current 5 000m and 10 000m National Collegiate Athletic Association champion

Since I was a little girl I dreamed of running professionally…Thanks to @adidasrunning that dream is now a reality pic.twitter.com/lGf8zhYgeK

Awesome day yesterday @Skechers_SA range presentation! Falling more in love with their shoes everyday! Thank you for having me! #blessed pic.twitter.com/BlURUUDf5i

Source: Official Rio Olympics 2016 websiteWould you like to use this article in your publication or on your website? See: Using SouthAfrica.info material 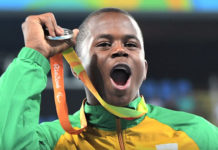