Roland Schoeman turned in a sensational display at the Deutsche Ring Aquatics short course competition in Hamburg at the weekend, setting a world record in the 50 metres freestyle whilst also winning the 100 metres individual medley.

It proved his decision to miss Swimming South Africa’s annual awards function, where he was named Athlete of the Year for the third year in succession, to be a good one.

The 26-year-old sprint ace became the first man in history to break the 21-second barrier in the 50 metres freestyle, touching in 20.98 to shave 0.12 seconds off the previous mark set by France’s Fred Bousquet in 2004.

Financial reward
The new record was worth $15 000 to Schoeman, who also shares the 100 metres world short course record with the USA’s Ian Crocker.

In the final, he was a little off the record he swam in the semi-finals, turning in a winning time of 21.28.

In the final of the 100 metres individual medley, Schoeman touched in 52.56 seconds to secure victory.

He is off to Victoria, Canada, next to compete in the Pan Pacific Championships from 17 August to 20 August. Last year, in Montreal, he won two gold medals and a silver at the Fina World Aquatics Championships.

Return to competition
Ryk Neethling, returning to competition after a two-month break, took third in 100 metres individual medley, some way behind Schoeman in 54.19 seconds.

After the competition, Schoeman was named swimmer of the meet, which saw him add a car to the $15 000 he had won for his world record.

He was not the only South African to stand out.

Lyndon Ferns picked up gold in the 50 metres butterfly – an event in which Schoeman holds the world record, set in Montreal in 2005 – in 23.24 seconds.

Women
In women’s action, Suzaan van Biljon excelled in the breaststroke, winning the 50 metres in 31.17 seconds, and taking victory in the 200 metres in 2:23.42.

Liza-Mari Retief secured fourth-place in the 100 metres butterfly in a time of 59.84 seconds. 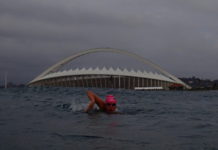