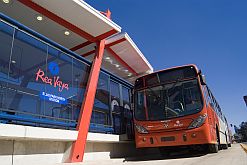 Johannesburg’s Rea Vaya has been running
for a year.
(Image: City of Johannesburg) 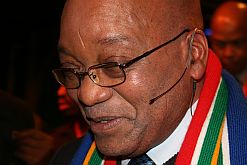 Although the 2010 Fifa World Cup may almost be forgotten by some, its legacy will ensure that most urban South Africans have easy access to efficient public transport by 2020.

This was the message from President Jacob Zuma during a recent parliamentary session on the success of the tournament.

“The World Cup legacy will ensure that by 2020 more than 85% of any city’s population will live within a kilometre or closer to an Integrated Rapid Public Transport Network feeder or corridor,” Zuma said on 18 August.

South Africa’s public transport infrastructure was beefed up for the football spectacle, which was won by Spain. Improvements included new bus and rail options, as well as the upgrade of national roads.

“Public transport formed the backbone of our transport plans for the 2010 Fifa World Cup, and one of the greatest successes of the tournament,” said Zuma.

The government spent about R33-billion (US$4.5-billion) on transport infrastructure, telecommunications and stadiums for the Fifa tournament.

In Johannesburg and Cape Town a Rapid Bus Transit (BRT) system was set up to provide a link between various part of the cities.

Johannesburg’s BRT system is called Rea Vaya, which is local slang for “we are going”, and has been running for a year now.

The service between Soweto and Johannesburg’s central suburbs has been operating at full steam, while routes and more buses to other parts of the city will be introduced in late 2010.

Cape Town’s rapid bus system is currently running between the city’s civic centre and the airport. Another route linking Cape Town Stadium and the city centre, initially just for the duration of the World Cup, will resume in September, according to the city’s BRT consultant Martin Slabbert.

A third route connecting the city centre and the West Coast will be introduced in February 2011.

Cape Town’s system is a long-term project that will eventually link the city and most surrounding towns.

“It’s an enormous project. We are talking about four phases that will be introduced between now and the next 15 years,” said Slabbert.

Construction of a BRT system has also begun in Pretoria, said the City of Tshwane spokesperson Dikeledi Phiri.

The 160km/h Gautrain was introduced just before the World Cup to provide a shuttle service between Sandton in Johannesburg and the OR Tambo International Airport. Other lines, including one from Johannesburg to Pretoria, will start operating in the near future.

“Our integrated transport infrastructure and networks will improve the lives of South Africans for many years to come,” Zuma said.

After successfully introducing user-friendly transport for the World Cup, South Africa has shown it’s capable of reaching world-class standards. “We have earned the reputation of a country that can deliver on its undertakings,” Zuma said.

“With regards to the economic impact, South Africa has demonstrated that it has the infrastructure and the capability to warrant serious investment consideration.

“The World Cup now opens the country to further investment, growth in trade and economic opportunities,” Zuma said, adding that the country must now build on what has been established.

“We view the tournament not as an end in itself, but as a catalyst for development, whose benefits will be felt long after that final whistle.”