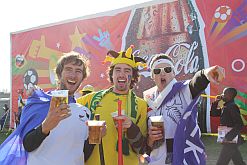 South African football fans are gearing up
to support the 2010 Fifa World Cup kicking
off in just a few days.
(Image: Nosimilo Ramela)

International visitors to South Africa, here to support their teams in the 2010 Fifa World Cup, say they are having a blast.

By the end of week one many foreign visitors had hailed Africa’s first World Cup as one of the most vibrant. “The German World Cup was very exciting for us but South Africa has a different vibe altogether,” said Philip Friedrich from Germany.

“South Africans are very friendly people and they know how to have fun. I’ve never danced and sang so much before, during, and after a game. When those vuvuzelas start blowing you can’t help but feel the spirit of Africa moving you.”

With his friends, Friedrich is following their team around the country. They are currently staying at a bread and breakfast in Durban and attended the Germany-Australia game at the city’s Moses Mabhida Stadium on 13 June, where the Germans beat Australia 4-0.

“Durban is lovely and the stadium here is an absolute masterpiece,” he said. “The spirit at the game was second to none; we had a blast with the locals.” Friedrich said he was proud of how his country played and hopes they go far in the competition.

“The great thing about South Africa is the entertainment lifestyle. If we’re not at the games, we can still enjoy good food and beer, and great dance music at the lively clubs. We want to continue the celebrations so are hoping Germany go all the way to the finals. If they don’t, well, there’s a lot to do here and we’ll just keep the party going.”

Monica Gonzalez from Mexico arrived in South Africa with her fiancé and a few friends, in time for the opening ceremony on 11 June. They are staying in at a hotel in Sandton, north of Johannesburg.

“We attended the opening game at Soccer City Stadium and enjoyed the festivities in Soweto afterwards. Contrary to what most media reported about this country, it’s very beautiful, and we have not had any incidence of crime or hostility. The citizens are so welcoming.”

Commenting on the opening ceremony, she said, “It was such a powerful ceremony, I love how this country has stayed so true to and so proud of its roots. The ceremony celebrated Africa and made us tourists feel inspired and welcome. We even felt African ourselves.”

Gonzalez would definitely return to South Africa after the World Cup. “I would really like to come back here with my family just for a visit, there’s so much history here and lovely sites to see.”

Fernando Suarez from Uruguay could hardly hide his excitement as he and his friends made their way to Pretoria’s Loftus Versfeld Stadium on 16 June to watch the clash between South Africa and Uruguay. They were dressed in their team’s colours of blue and white and carried their country’s flags as well as matching blue and white vuvuzelas. “We are going to have some shisa nyama [hot meat] and beer in the township before the game,” he said.

Suarez said they love the traditional South African food and the company at local restaurants and Fan Fests. “I think South Africa makes the best meat and I like the pap served alongside. The prices are good and the portions are very generous.”

He and his friends watched the opening game at one of the local pubs, which is where he believes they discovered the “true Africa”.

“True Africa is its food and its people – the gorgeous women; we love the South African women. South Africans are passionate about football and food, and these three things go very well together for us – football, food, and beautiful women. We love South Africa.”

In Rustenburg, about 160km from Johannesburg, Steven Brown from England said they were “having the time of our lives”. He travelled to South Africa with his family and is staying in the North West province town, also the English team’s base. “I’ve hardly slept in the last week – who needs sleep when you’re having so much fun?”

Brown said they were very pessimistic when they bought World Cup tickets. “There was so much bad media around the UK, and we literally thought we would be robbed, raped and killed on arrival.

“However, things are very different and it’s been a welcome revelation. The people are warm and friendly, ready to help us find our way, and to explain anything that concerns or confuses us. The stadiums and hotels are gorgeous and the atmosphere is electric at the games.”

With three weeks of the World Cup to go, locals are keen to keep the good times rolling for the tourists. Durban tavern owner Sbonelo Nxumalo said they are stocking up to ensure they can keep their foreign visitors happy.

“We didn’t want to buy too much before we knew we’d have a good number of visitors. Now we are stocking up on beers, pap, and meat and getting our local DJs to come and play here. We see they love our beer, music and our food so we’ll keep that coming. If our visitors are happy then we’re happy.”