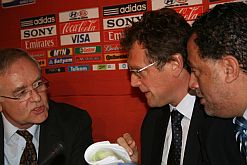 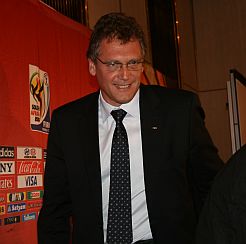 Africa’s first Fifa World Cup looks set to be a sold-out affair, with South Africans, Americans and the English showing heavy interest in the third phase of ticket applications.

The world football body is all smiles due to about two million applications for tickets for the June-July tournament. With the 900 000 remaining tickets already selling fast, there’s no doubt South Africa will stage a world-class spectacle.

“We have sold over two million tickets and that’s good news,” said Fifa general secretary Jerome Valcke at a media briefing in Johannesburg on 27 January.

Fifa has seen a major spike in interest during the third phase of ticket applications, which ends on 1 February. During this period of 1 206 865 applications were received from football fanatics in 192 countries.

Almost 80% of applications in the third phase came from South African residents, an increase of almost 25% when compared to earlier ticket application phases.

And it seems the resurgent Bafana Bafana, South Africa’s national squad, will not be short of supporters during its World Cup matches.

“Since the final draw in Cape Town we have seen a flurry of activity in ticket sales,” said Local Organising Committee chairperson Danny Jordaan. “We are particularly happy about ticket sales in South Africa.”

While South Africans are the leading applicants in phase three, interest is also mounting in the other countries that will be represented in the 32-team tournament.

The US is leading the pack in this category, with 50 217 applications received during the third phase. Next is the UK with 41 529 requests. Group D opponents Germany and Australia are also hungry for tickets, with 14 647 and 15 523 applications respectively. Some 14 804 applications have been received from Mexico, which will clash with Bafana Bafana in the opening match, and 10 767 from Brazil.

When it comes to other African countries, Botswana is leading with 2 519 in applications, while 1 795 have come from Mozambique and 1 191 from Namibia.

The next phase, which will run from 9 February to 7 April, will see 400 000 tickets being sold on a first come, first served basis through First National Bank branches and Fifa’s website.

Fifa will also open call centres to enhance its services during phase four. South African fans should dial 083 123 2010 to make general enquiries and applications, while those outside the country’s borders can call +00 414 458 32010.

“We will sell every single ticket,” said Jordaan.

Fifa will open ticket centres on 15 April in all nine host cities, with two in Johannesburg. The centres will simplify the process, enabling fans to buy tickets over the counter and collect their confirmed tickets.

“You will be able to go to a counter, pay cash and take your ticket home,” said Horst Schmidt, chairperson of the Fifa ticketing sub-committee.

“We will be ready to fulfill requests and hopefully we’ll have tickets available to fulfill the demand,” Schmidt said.

At the media briefing Fifa appealed to the international media present to stop spreading negative messages about South Africa which “have no basis”.

A stern Valcke told the press that certain media organisations, especially those in the UK and Germany, were hell-bent on “discouraging people from coming to South Africa”.

To even suggest that Fifa made the wrong decision in bringing the World Cup to South Africa was “insane”, he added.

Jordaan was quick to remind reporters that South Africa hosts about 1.5-million tourists every year who are happy to visit the country. “There are things that you read that have no basis,” he said.

The number of tickets sold complements the work done by South Africa and Fifa to ensure that the tournament will be a spectacular event, Jordaan added.

“We’re in good shape and the reality of ticket sales must be added to all the work we’ve done,” he said. “If you add it all up you must come to the conclusion that the country will deliver the best World Cup come 11 June.”