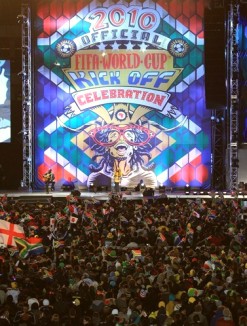 Soweto came to a standstill on 10 June, the eve of the greatest sporting event Africa has ever hosted.

The 2010 Fifa World Cup Kickoff Concert, held at Soweto’s Orlando stadium, showcased not only the talents of African and international musicians, but also the pervading spirit of unity, goodwill and excitement.

In a stadium packed to capacity, 30 000 football supporters, in true Rainbow Nation style, braved the winter chill to show their support for the country and the long-awaited event.

The stadium was awash with flags, most of them South African, and the green and gold of the national football team Bafana Bafana.

After hours of warm-up acts, the internationally-televised portion of the concert began with a local flavour as dancers and drummers set the rhythm, followed by music stalwart Hugh Masekela.

The trumpeter performed his 1968 hit “Grazin’ in the Grass” before he was joined by South African songbird Lira for a rendition of the late Miriam Makeba’s international hit “Pata Pata”.

Zuma concurred, saying, “South Africa is very happy to host the 2010 Fifa World Cup. We would like to thank Fifa for taking this decision to host the first World Cup on African soil.”

The president thanked South Africans for the warm welcome they’ve extended to the thousands of overseas visitors, and encouraged them to keep it up for the duration of the tournament.

“Africa is showing the world that it is capable of handling any matter of the world, like all other regions,” said Zuma.

The Peas performed several of their popular hits, including “Where Is the Love,” “Pump It,” “Meet Me Halfway,” “Boom Boom Pow,” and “I Gotta Feeling”.

With the brightly-clothed Soweto Gospel Choir singing backing vocals, John Legend and Beninese star Angelique Kidjo performed a cover version of Curtis Mayfield’s “Move On Up”, featured on Listen Up, the official World Cup album. The energetic Kidjo returned to the stage a short while later to duet with local legend Vusi Mahlasela, who stirred the crowd with his deft vocals and delicate guitar work.

International superstar Alicia Keys scored a huge cheer from the crowd when she appeared on stage. Keyes entertained with some of her hits, including “No One,” before teaming up with local outfit BLK JKS for a cover of the late Brenda Fassie’s “Too Late for Mama”.

An ebullient Archbishop Emeritus Desmond Tutu praised former president Nelson Mandela for his invaluable contribution to nation-building, and for throwing his support behind the World Cup in Africa. Wearing bright yellow Bafana Bafana gear, the Nobel Peace laureate was in high spirits as he personally welcomed the thousands of visitors to South Africa.

Then it was the turn of Colombian singer Shakira to perform the catchy official World Cup song “Waka Waka” with Cape Town-based Afropop group Freshlyground. Their collaboration is also featured on Listen Up.

The concert featured other top-notch acts such as the blind husband and wife duo Amadou and Mariam from Mali, Tuareg group Tinariwen, also from Mali, rocker Juanes from Colombia, local favourites the Parlotones and BLK JKS, Somali-Canadian rapper K’Naan, and another Malian act, the guitar wizard Vieux Farka Toure. Africa’s talent was undoubtedly the highlight of the evening.

Amadou and Mariam’s hit “Celebrate the Day” was the official anthem for the previous World Cup, held in 2006 in Germany.

The event closed with “Everyday People”, the 1968 hit by Sly and the Family Stone, turned into the anthem for the night.

Football history
The vibrant music was interspersed with video footage showing past football greats and past World Cup champions, and work done for the official 2010 Fifa charity 20 Centres for 2010. Fifa has stated that all net proceeds from the concert will be donated to the cause.

Production was slick and seamless, and the light show on stage was impressive, with very few noticeable glitches.