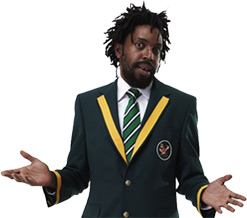 Kagiso Lediga was one of the South African
comedians who kept an overwhelmingly
South African audience of more than 3 000
doubled up with laughter at London’s Royal
Albert Hall in May.
(Image: Bafunny Bafunny)

With 21 days to go before South Africa hosts the 2010 Fifa World Cup, eight South African stand-up comedians representing a kaleidoscope of the country’s racial diversity kept an overwhelmingly South African audience of more than 3 000 doubled up with laughter for three side-splitting hours.

The show – called Bafunny Bafunny, a word-play on the national football team Bafana Bafana (“the boys”) – was an irreverent attempt to build national enthusiasm for the world’s largest sporting event among South Africa’s largest expatriate community – sometimes referred to as the 10th province of South Africa.

It was catharsis of the kind that has been kindled – and could be fast-forwarded – by the national convergence and unity of purpose thrust on South Africans by hosting the world’s largest and most diverse sporting event.

“The hosting of the 2010 World Cup will change the way the world sees South Africa and the African continent forever,” said South African President Jacob Zuma, who kicked a mean football while serving time for resistance to apartheid in the country’s notorious Alcatraz-like Robben Island prison.

Just as the 2006 World Cup had Germans smiling, drinking beer and waving the national flag en masse for the first time in 60 years, so the first African World Cup in South Africa could have an equally dramatic effect on promoting social cohesion in a country with a legacy of deep racial inequality.

Inside the hall there were two gigantic South African flags on either side of the massive organ and nothing to remind the audience that they were sitting in the heart of London.

The crowd, a tiny fraction of the estimated 600 000 South Africans in the UK, was mobilised by word-of-mouth without a single advertisement in mainstream media.

Their repartee – peppered with four-letter words – slaughtered a series of favourite targets: Fifa, the fiery African National Congress youth leader Julius Malema, the police shoot-first policy, violent crime and the biggest and most sensitive no-go area of all: race.

How do you justify a song coveted by one group of South Africans when it calls for the killing of members of another? Do you laugh or cry?

At the Royal Albert Hall on 20 May the only tears to be found were those generated by excessive laughter.

For three hours, a diverse audience of South Africans laughed at themselves, at each other and with each other at things that many could not talk about outside the comfort zone of their racial or cultural groups even a few years ago.

In recent months, South Africans of all races have been donning Bafana football shirts on Fridays, flying the national flag from their car windows, wrapping their rear-view mirrors in socks sporting the national flag and chanting slogans about Africa’s time having come: “It’s here. Can you feel it?” There is a rare inclusive outpouring of patriotic fervour.

As the row about the noisy but uniquely African trumpet – known as a vuvuzela – is debated on breakfast television shows at home and abroad, South Africans are undergoing a seismic shift in terms of social cohesion and identity which is set to be galvanised by hosting the 2010 Fifa World Cup.

White South Africans, previously wedded only to rugby while football was (and remains) an overwhelmingly black sport, are starting to take ownership of the national team and willing it to victory despite its low international ranking.

As the finishing touches are given to the 10 awesome stadiums, three transformed airports and a range of new transport and access routes, the level of national excitement is palpable.

Estimates of foreign arrivals have come down to 300 000 since the build-up began, which will mean that far more South Africans will get a seat at the stadiums.

The physical benefits for the country’s economic infrastructure are there for all to see despite a healthy debate about whether the large numbers of poor and unemployed South Africans will benefit from the expenditure of some R40-billion (US$5.2-billion) on stadiums and related infrastructure.

But the most enduring benefactor of the World Cup will be the national psyche and the quest for a common national identity to transcend a deeply divided past.

As former President Thabo Mbeki said when he spoke at the handover ceremony in Berlin in 2006, the German World Cup succeeded in restoring some of Germany’s self-respect after its legacy of national socialism.

“We are confident that the 2010 soccer World Cup will do the same to consolidate our self-respect and dignity gained when we attained our freedom and democracy in 1994 and, in a unique way, also help our own nation and the continent of Africa,” Mbeki said.

Long before the World Cup kickoff, Bafana Captain Aaron Mokoena took the lead in ensuring the legacy of the 2010 World Cup will benefit future generations of football players.

A year ago he launched the Aaron Mokoena Foundation, which will ensure that those who were denied an opportunity in the past will benefit from the coaching and mentoring services the foundation will provide initially in the sprawling townships south of Johannesburg including his home town of Boipatong in Sedibeng.

“The future of the country is in the hands of the youth,” said Mokoena. “I want to make a contribution to ensure that they have the opportunity to reach for the stars.”

An initiative such as John Perlman’s Dreamfields project is ensuring that thousands of would be football players are getting access to kit and playing fields often in the most remote rural reaches of the country.

Local Organising Committee CEO Danny Jordaan, who has become synonymous with the World Cup, sees the staging of the event as a culmination of the anti-apartheid struggle which so effectively used sport to defeat apartheid.

In 1995, former President Nelson Mandela used the Rugby World Cup to galvanise conservative white support for the country’s first black majority government. The story has been movingly told in the book Invictus by John Carlin and the film of the same name starring Morgan Freeman and Matt Damon.

Mandela was also instrumental in securing the 2010 Fifa World Cup for South Africa.

“Reconciliation is an important aim of the World Cup.” Jordaan told the Independent on Sunday. “We want to make this country better and more united and I think we will achieve that.

“It will chart a new course in our country’s history.”

John Battersby is a former southern Africa correspondent of the Christian Science Monitor and a former editor of the Sunday Independent in Johannesburg. He is co-author of Nelson Mandela: A Life in Photographs published by Sterling in the United States in January 2010. Battersby is a trustee of the Aaron Mokoena Foundation. He is currently UK Country Manager of the International Marketing Council of South Africa. This article was first published in the Christian Science Monitor (online)