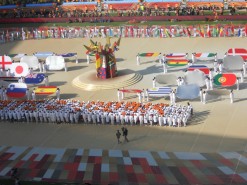 The giant baobab surrounded by the flags
of the 32 qualifying nations. 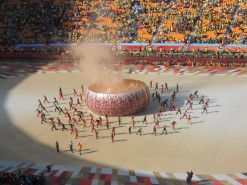 A calabash, identical to the exterior of
the Soccer City stadium, simmers in
the centre of the stage.

The 2010 Fifa World Cup opening ceremony showcased the vibrancy of Africa and the colour and diversity of South Africa, the host nation.

Thousands of fans packed into the magnificent calabash, Soweto’s Soccer City, to witness the official opening of the first World Cup ever to take place on African soil.

At the start of the ceremony, conceived by music arranger Lebo M, the five airplanes of the Silver Falcons, the South African Air Force’s aerobatic display team, swooped over the stadium as fans wept and bowed their heads with the emotion of the moment. The jets made another flyover at the end of the ceremony, trailing plumes of smoke.

Vuvuzelas rang out around the ground, but would be respectfully hushed a short while later during speeches and the national anthems.

Young South African imbongi or praise singer Zolani Mkiva, the Poet of Africa, opened the proceedings with a passionate performance. The centre of the stage was then filled with 1 500 exuberant dancers of all shapes, sizes and ages.

Many fans did not make it to the stadium in time for the ceremony because of gridlocked traffic, but those who were there were entertained by the likes of Thandiswa Mazwai, Hugh Masekela, TKZee and HHP (Hip Hop Pantsula), Nigeria’s Femi Kuti, the legendary Osibisa of Ghanaian origin, and Algerian singing star Khalid who performed his Arabic smash hit “Didi”.

Tenor Timothy Moloi sang the Nelson Mandela-supported anthem “Hope”, which contains a spoken message from the former president and fervent sports fan. Siphiwo Ntshebe, who sang the version on Listen Up, the official Worfld Cup album, was chosen by Mandela to perform the track but died suddenly in May after a bout of meningitis.

R&B superstar R Kelly sang the World Cup anthem “Sign of Victory” with the backing of the Soweto Spiritual Singers.

The dancers operated a large dung beetle puppet, which rolled away an oversized Jabulani football. To the beat of African rhythms they also constructed a giant smoking calabash or cooking pot and then Africa’s iconic baobab tree on the raised platform in the middle of the stage.

Other highlights included a map of Africa made of large sheets of coloured cloth, a tribute to all nations who took part in the qualifying stages and one to the 32 teams that did make it through, and the World Cup logo artfully put together like a jigsaw puzzle by youngsters wearing different coloured clothing.

An hour later, Fifa president Sepp Blatter and South African president Jacob Zuma took to the field for the formalities ahead of the opening game between South Africa and Mexico.

Blatter congratulated South Africa for the impressive arrangements and all the hard work that went into preparing for this day. He thanked the country for its hospitality and dedication before handing over to President Jacob Zuma, who was to declare the tournament officially open.

Zuma alluded to former president Nelson Mandela’s absence – the elder statesman was expected to grace the occasion but the tragic death of his young great grand-daughter, as she returned from the inaugural kickoff concert the night before, plunged the Mandela family into mourning and prevented Mandela’s appearance.

“Madiba sends a message – the game must start,” said Zuma. “You must enjoy the game.”

He continued, “The time for Africa has come. It has arrived. Allow me to say I am honoured and privileged to be given an opportunity to declare the 2010 Fifa World Cup open.”

The dignitaries were then introduced to both teams and the match officials. Once the two national anthems had been enthusiastically sung by both camps, Uzbek referee Ravshan Irmatov, whose own football career was cut short by injury, blew the whistle to get the tournament underway.

To the delight of their South African supporters, Bafana Bafana went on to hold their opponents to a 1-1 draw and scored a point in their Group A opening match, continuing the tradition of hosts not losing their opening games.

According to Google the search term “world cup opening ceremony 2010 live” was the ninth most popular search during the ceremony’s duration.

SAMA-nominated R&B singer, Timothy Moloi, is to stand in for the late Siphiwo Ntshebe, whose sudden death on May 27, 2010 shook the music world. Ntshebe had been chosen by Mandela to convey a global message of hope at the opening of the FIFA 2010 World Cup. Moloi will sing the Hope track, which is believed to contain a spoken message of hope and compassion from Mandela.