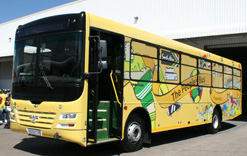 The People’s Bus includes flooring that
resembles a football pitch, seats covered
with Bafana Bafana football jerseys and
striking South African artwork inside and
out. 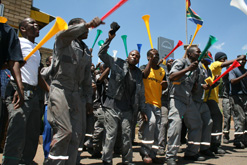 MAN Truck and Bus workers celebrate the
launch of the People’s Bus. 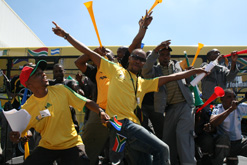 The People’s Bus roadshow team will get
South Africa in the mood for 2010.
(Images: Nicky Rehbock)

World Cup fever has hit the road in the form of the People’s Bus – a mobile hub of football trivia and fan gear that will bring the fun, excitement and spirit of the tournament to as many South African communities as possible.

The vehicle, a joint initiative between Brand South Africa and MAN Truck and Bus, set off on its nationwide journey on Friday, 19 February. It’s due to visit more than 50 locations between now and 11 June, when the long-awaited football spectacular kicks off at Soccer City in Johannesburg.

The People’s Bus roadshow team will encourage South Africans to be good hosts, fly the flag, sing the national anthem with pride and learn the Diski Dance through dance workshops, music and fun competitions at each stop. Mini football matches and football clinics for schools are also on the agenda.

The roadshow will help drum up support for the Football Fridays initiative and inspire confidence in South Africa’s national squad, Bafana Bafana.

At each stop the public will allowed to take a 15-minute tour of the bus, which offers a thrilling, interactive journey complete with 2010 Fifa World Cup team facts, foosball tables and a mini cinema showing unforgettable moments from previous tournaments.

The visitors’ experience of the bus is enhanced through flooring that resembles a football pitch, passenger seats covered with Bafana Bafana football jerseys and striking artwork inside and out with a distinct South African flavour.

Before stepping off the vehicle, visitors will also get the chance to wish Bafana Bafana the very best of luck for the tournament by slotting messages into a specially designed post box.

Brand South Africa and MAN have scheduled bus stops across all nine provinces and their smallest cities and towns, including Dullstroom in Mpumalanga, Upington in the Northern Cape, Bhisho in the Eastern Cape, and Ulundi in KwaZulu-Natal.

The bus is also due to make stops at big sporting and cultural events around the country in the run-up to the World Cup – including the Comrades Marathon, the Rand Easter Show and the Cape Town Jazz Festival.

MAN has generously donated the customised vehicle – which took 300 of its employees six weeks to convert – as well as a dedicated driver, fuel, insurance and audio-visual equipment for the duration of the roadshow. After the World Cup it will be reconverted into a standard passenger bus. 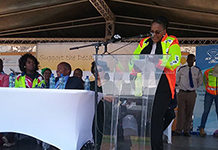