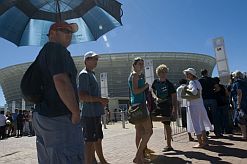 South African Tourism is confident that foreign football fans in the country for the 2010 Fifa World Cup are making a positive contribution to the economy – and that the benefits will last long after the final whistle is blown.

“From a touristic point of view this has been a fabulous opportunity, given the exposure that South Africa has received all over the world,” said Thandiwe January-McLean, head of South African Tourism.

Gillian Saunders, of accounting and consulting firm Grant Thornton, said predictions are that South Africa will make about R8.8-billion (US$1.1-billion) from tourism during the World Cup. “That’s just a slice of the R93-billion [$12-billion] that the games are expected to generate for the economy.”

Evidence of tourist interest in the country can be seen in local bars and restaurants, which are packed daily with foreign fans here to support their teams.

Cape Town‘s V&A Waterfront has become a major attraction for those attending matches at the city’s Green Point stadium.

“On a daily basis it’s more or less in the region of 100 000 people coming through, with spikes on match days. These loyal supporters travel with their teams. It’s absolutely fantastic,” said V&A Waterfront spokesperson Annemie Liebenberg.

Cape Town hotels have reported that accommodation close to the stadium has been almost booked out over the past two weeks. Tour operators have also seen a 20% increase in business compared to June 2009.

According to South African Tourism, even hotels in Johannesburg, the country’s economic hub, are 85% full.

This is despite local experts having to lower initial expectations, from 450 000 foreign visitors to 300 000 over the four-week period, due to a drop in ticket sales and accommodation bookings.

Although the tournament is being played during the country’s June and July winter season, traditionally unpopular among foreign holiday-makers, tourist numbers have so far been on a par with South Africa’s busy summer period – this has given us a second peak season.

World Cup visitors in Durban say they are so impressed with South African hospitality that they are willing to become tourism ambassadors for the country when they return home.

Durban mayor Obed Mlaba said he has spoken to many tourists who have been impressed by South Africans’ warm, welcoming spirit. “They will go back with a different view of our country. Many came here thinking that they were visiting a very harsh and hostile country, but they have been treated well and they are happy,” he said.

Mlaba has congratulated Durban’s locals for helping make tourists feel safe and welcome around the stadium and the city. “Although the authorities have done all the planning and implementation, it is the local residents who have extended their hospitality to local and foreign visitors.”

Even representatives in the smaller host cities, such as Bloemfontein, Rustenburg and Port Elizabeth, say they have been inundated with tourists who are clearly enjoying the local sites, bars, restaurants and hotels.

“We sold the most beer we’ve ever sold in the nine years we’ve been in existence,” said Sandy Nel, owner of News Cafe in Port Elizabeth.

Nel said the restaurant has sold 3 135 units of beer during the tournament so far, and has seen a 200% rise in turnover.

Port St Johns holiday resort owners say they have also noticed an increase in the number of tourists since the beginning of the World Cup. Although this small town along the Eastern Cape coast was not chosen as a specific host centre, it has drawn in many tourists attending matches in the province.

Fans say they like the area because of its uniqueness and warm conditions. “We came here because we heard that there’s a jungle all the way to the beach, and the weather is warmer here than in Cape Town,” said the UK’s Martin Bouwer.

“It has been great hosting people from other countries. Tourists like this area because it is a stop-over between Durban and Port Elizabeth,” local business owner Andy Jacobs added.

With all this positive feedback, it seems the R100-million ($12.9-million) South Africa spent on its World Cup marketing campaign was well worth it. “The marketing benefits from hosting one of the world’s most-watched sporting events have been invaluable,” January-McLean said.