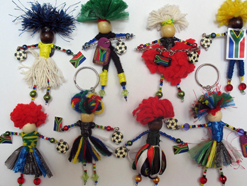 With the 2010 Fifa World Cup only three weeks away, Cape Town-based company Elolo is joining the excitement by selling weird and wonderful little dolls for fans to take home as mementos after the tournament – all made by members of an impoverished community.

Affectionately called SA Soccer Dollies, the figurines are made from colourful wool, wire, beads and bits of plastic, and have mini South African flags and footballs attached to them.

The pieces are made for Elolo by nine women and two men from the Mfuleni township community outside Cape Town, where HIV/Aids and unemployment is rife.

“Everybody works from their own homes, which allows them to look after their children, work their own hours and save on transport costs – all while making a living and supporting their families,” said company owner Laurie Broomberg.

Broomberg was born and raised in Zimbabwe, but now lives in Cape Town. She opened her company in 2007 and initially worked alone with beads, but her activities soon turned into a jewellery enterprise. “I decided to look for people to work with and concentrated on growing the business,” she said.

Inspired by the country hosting Africa’s first football World Cup, Broomberg started designing the dolls in 2009. “I just thought I’m going to make as many dollies as possible. They are a memento of this great event,” she said.

Each doll has a name and comes with a warm message, such as: “My Name is Thembisa and I will bring you love, laughter, happiness and prosperity!”

Broomberg began her marketing drive from home in February by sending out emails to different people and companies she thought would be interested in the dolls. The response has been “phenomenal”, she said.

“We have been receiving many orders from people wanting the dollies, mainly corporate companies that want them for clients and employee gifts. People organising events, small retailers and promotional gift companies are also putting in orders.”

Requests come from all over the country, every day. “We have so many orders, we are working around the clock to ensure we don’t run out of stock.”

Broomberg said the success of the business has transformed the lives of the men and women on her team.

“The work we do has really changed these men and women’s lives. My manager once lived in a small room, but was able to afford a three-bedroom house after working on the dollies. The other people on the team have managed to get their homes tiled and send their kids to school,” said Broomberg.

This has been a great reward for the Cape Town entrepreneur, who started the business in the hopes of changing people’s lives and challenging the stigma of HIV/Aids.

“I chose to work with people affected by HIV/Aids because they are often discriminated against,” she said.

“I think tourists will want to buy the dollies. They are made locally and help to support disadvantaged men and women. They are a piece of Africa – a piece of history for people to take home after the World Cup.”