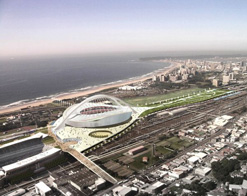 As the city of Durban kicked off celebrations marking 100 days to the 2010 Fifa World Cup last night, it was evident that South Africa is on track to success as hosts of Africa’s first global football extravaganza.

As the city of Durban kicked off celebrations marking 100 days to the 2010 Fifa World Cup last night, it was evident that South Africa is on track to success as hosts of Africa’s first World Cup.

“As we mark 100 days to the start of the 2010 Fifa World Cup, we do so with immense pride,” said Deputy President Kgalema Motlanthe during the 100 Day Banquet at the Durban International Convention Centre. “We are proud because, in many respects, we are able to pronounce ourselves ready to welcome the world three months ahead of schedule.”

Motlanthe used the occasion to not only celebrate the countdown to the 2010 Fifa World Cup, but to celebrate the hard work that has been put into getting to the 100 day mark.

“We have gathered here to begin a countdown to the greatest football tournament on earth. On behalf of the Republic of South Africa, I wish to extend our gratitude to all the men and women who have worked on the World Cup project and those who are still working on the last phase of our preparations”.

“When the countdown started there were 2 218 days; we did not count in years and months,” he said. “But when you arrive at 100 days it is the last three digit number on the countdown.

“It is within this time period when people start applying for their leave, plan for their travel and even pay.”

Khoza said South Africans’ anticipation of the event is growing. “We cannot wait until the 32 participating teams arrive. We cannot wait to enjoy the 30 days of football, 30 days of festival and 30 days of unprecedented and unequalled excitement and celebration. We cannot wait to bask in global attention, to project an image of Africa so vibrant and so positive that we create wealth, jobs and opportunity.”

Although he had many to thank for the hard work put into the preparations for the World Cup, Khoza singled out the ordinary citizens of South Africa, and Africa, in preparing a country for the World Cup.

“Today, 100 days before the opening match, I ask you to recall the words of US President Barack Obama: Can we stage an outstanding World Cup in Africa? Yes, we can. We are waiting and we are ready.”