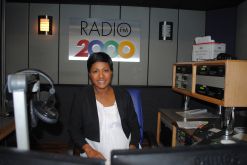 Strong role models at home and in the local community are vital to showing girls and young women that they are capable of achieving great things. 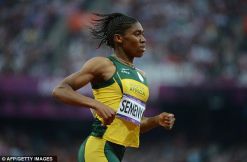 “I used to play soccer. The coach used to tell me there are many ways to kill a cat. I’m very thankful for that because already now as we speak I did kill a cat – by being a champion.” 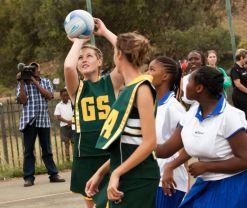 Of the 125 South African athletes sent to the 2012 Olympics, 58 were women, the largest group sent to the Olympics in the post-apartheid era.

Of the six medals won, two went to female athletes. The country’s netball team is the best in Africa and the fifth best in the world. South Africa’s women’s cricket team is ranked sixth in the world despite all the players being, until very recently, amateurs. The South African national hockey captain, Marsha Marescia, has had a hockey stick designed and named in her honour by sponsor, Kookaburra. South Africa has even produced two female boxing world champions in Noni Tenge and Unathi Myekeni.

Despite these successes there are many who cling to the outdated belief that sport is a male domain; that it is a world run by men for the enjoyment of men where women are the cheerleaders or the taxi drivers carting sons to games. The media is no exception, perpetuating these stereotypes.

A University of Pretoria study found that women’s sport was underreported compared to men’s sport in the country’s media, and that the findings correlated closely with media coverage of female sport in the USA, Australia and the United Kingdom. The Gender and Media Progress Study 2010 conducted by Gender Links found that “sport is the most covered topic in South African media with over a quarter of all coverage. Yet only 10% of this coverage is of women sport or women athletes.”

But, in South Africa, attitudes seem to be slowly changing, thanks in part to influential women like Kass Naidoo and her brainchild, the annual gsport Awards.

Naidoo was the country’s first female cricket commentator and now hosts a sports show on 2000FM. Eight years after beginning a career in media, print then radio, Naidoo became an overnight success when she anchored the 2003 ICC Cricket World Cup for the SABC.

Naidoo and the dedicated women she calls on for support – the gsport Legends – want to see South African sport, and society, be more accepting of sportswomen.

The first gsport Awards ceremony in 2006 was just 20 women celebrating one winner. Today there are 24 nominees in eight categories celebrating women as volunteers, passionate amateurs and professionals.

“My son has just started playing soccer. Will he be good enough to play for his country or Manchester United? I don’t know. But it’s a dream he can make come true. That’s what I want for girls in this country, to allow them the chance to make their sporting dreams attainable.”

The right to freedom of association through sport is enshrined in South Africa’s Bill of Rights; legislation, which in 1996, and again in 2012, made providing accessible sports infrastructure a government priority.

The benefits derived from playing sport extend beyond health and fitness. Participants learn important social skills such as teamwork, commitment and leadership. It is why it’s important to Naidoo that the number of women participating in sport must increase. A 2005 Department of Sports and Recreation study pegged the number at 11% of women participating; today the number is not much higher. The same study found that 46% of the male population was active participants.

Earlier this year the US consultancy Ernst & Young released a report that analysed sporting activity among its senior female executives. It found that 19 out of 20 women holding chief executive positions were sporty teenagers who had played organised sport in high school and university, some at professional level.

Naidoo calls each of the nominees herself and is still delighted by the response she gets when she speaks to younger contenders. The excitement at getting to meet their heroes at a glittering event overwhelms them and they often burst out crying.

“It’s for these girls and the ones who are not participating in sport because they don’t have role models that we have the awards. There are so many of them role models but they are just not given the same coverage as the men.”

The gsport Awards and the website allows Naidoo to dig for the stories that do not receive media attention. Through it she motivates and educates young people, especially girls, that life is about being fit and healthy and that there is a sport for them no matter their age, size or ability. Naidoo highlights stories like Betty Dlamini’s, nominated for a Volunteer of the Year award. The administrator runs school sports programmes in the rural Thabo Mofutsanyana District Municipality, in the eastern Free State.

“When our children are involved in sport they are able to focus more on their school work, they spend less time watching TV, playing video games or doing drugs,” Dlamini told her local newspaper, The Weekly. Being the role model who helps children in her care develop skills is important to her.

“I am burning inside because our people have potential but we do not have enough people to help develop and give them the skills,” she says.

Cricket South Africa (CSA) took a giant leap forward earlier this year when they handed a Proteas’s contract to six women. The contracts will allow players like Marcia Letsoalo to concentrate on improving their skills and increasing the profile of women’s cricket in the country. With financial support from sponsor Momentum, CSA joins England, Australia, Pakistan and the West Indies in professionalising women’s cricket.

Letsoalo grew up in Phalaborwa, Limpopo, falling in love with the game she watched on TV. She idolised Jacques Kallis, but wants to match Makhaya Ntini’s career path. Without female role models Letsoalo hid her love for cricket until a friend invited her to play street cricket in Phalaborwa.

“Children need examples they can aspire to be. Role models are more than just inspiration, just by being an example they show what is possible, whether it’s a doctor or a lawyer or an artist or a sportswomen. I hope my success allows a girl child to believe that someone like her can be a success,” Letsoalo says.

A market for women’s sport

With two million active players in South Africa, netball is the most popular sport played by women; Netball SA is hoping to tap into that market with its proposed semi-professional Netball Premier League slated to begin in December. With a proposed budget of R52.6-million and a five-year contract with Supersport to televise the league and home tests, Netball SA hopes to create at least 200 career opportunities for women in sport.

There will be 10 teams – two in Gauteng – across the nine provinces; these will form the basis for netball development in each province. Each provincial board has to implement regional plans to develop the game in schools, clubs and rural areas.

“Some of the provinces have tapped into male expertise where necessary but all our coaches and team managers are women. T his as an opportunity to give our national players more competitive game time but also to get more ladies involved at all levels of the game,” says Netball SA vice president and chief executive officer, Blanche de la Guerre.

The league will contract national players for a year, and team or provincial players will earn six-month contracts. “Our national players lose leave days or have to work on contract to free them up to play for their country. We want to give them a chance to earn a salary and help to develop netball. They should not have to make those kinds of sacrifices to earn the right to represent us,” de la Guerre added.

Television coverage is also seen as important to developing women’s sports in the country. “Television shows people that netball at that level is not the sedate game they remember from school. It is fast, entertaining and competitive. We get so many enquiries after our national team has been on television; ladies who want to know where they can play and how to get involved.”

For Naidoo the ideal is to see a world where women are not embarrassed to compete as fiercely as men, where a woman like cricketer Mignon du Preez is lauded as highly as male counterpart, AB de Villiers, and where exceptional female athletes can build careers on the foundation of their abilities. Most importantly, Naidoo wants to see young girls get the same opportunities to participate in school sports that boys do.

“Caster Semenya wants nothing else but to run for South Africa. Netball legend Hazel Gumede wants nothing more than to share her knowledge. We must say to young girls inspired by these women it’s okay to dream the same dream.”