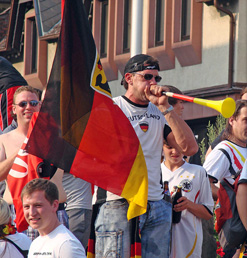 A fan celebrates in Altenstadt,
Germany, after his team’s 4-0 victory over
Argentina in a 2010 Fifa World Cup Round of
16 match on 3 July.
(Image: Barbara Müller-Walter, Flickr)

The Fifa headquarters are nestled into a secluded spot on the hill overlooking Zurich, one of the richest cities in the world. Here a glass of Coke will cost you R60 (US$8) at a restaurant. The city, set around a lake with snow capped mountains in the background, is picture perfect in a chocolate-box kind of way.

But it’s not just a twee live-in European theme park pretending to be a city. Zurich is also home to squats, innovative housing and artists’ collectives, large immigrant communities, a thriving music scene and political dissidents from around the world. Together they have created a vibrant urban life with oases of jazz, punk, radical Kurdish workers and Russian anti-Fascists.

But, as the radical groups here would be the first to acknowledge, much of the material basis for this flourishing urban life is premised on devastation in other parts of the world. The bankers here bailed out apartheid and have a long and sorry history of collaboration with oppressive regimes. They have, for generations now, drawn part of their wealth from the gold and diamond mines of South Africa.

Zurich has to be understood as the apex of a pyramid that reaches down, through corporate Johannesburg, to the Bantustans and the frontline states where women kept families going while the men were sent to dig the mines on poverty wages. The wealth of a city like Zurich is intimately connected to the devastation of a place like the Transkei.

In Zurich, Langstrasse, the traditional street for communist and socialist mobilisation, is also where football fans gather to celebrate their victories. During the early stages of the 2010 Fifa World Cup it was taken over by jubilant Ghanaians and Brazilians. Some of them were undocumented workers who usually keep to the margins of society. Some worked in the kitchens of the restaurants and bars along Langstrasse.

The street is also the heart of Zurich’s red light district and the women touting for corporate clients here seem to come mostly from Africa, Eastern Europe and South America. But in the carnival of victory, the football fans from Ghana and Brazil assumed, for a moment, centre stage in collective expressions of identity and joy.

Fifa is in charge of the administration of football and earn billions from the game. But neither this fact, nor the bitter inequality within world football, change the reality that when the whistle blows, 22 men confront each other as equals for the duration of the game. Unlike in the United Nations or the World Bank, anything can happen on the pitch. Ghana can defeat the United States. South Africa can defeat France. England can be cowed.

And watching Germany play in a German town like Wuppertal doesn’t really feel any different to watching South Africa play at home. The beer, the flags, the groans and roars that mark the waves of collective emotion that, for a moment at least, take us out of our own heads, the embraces that reach across social divisions, the hooting and hanging out of car windows and, now, the vuvuzelas, are all the same.

The football World Cup is a global carnival that is, at least via television, as accessible to the bankers in Zurich as it is to mine workers in Johannesburg or their families in Flagstaff.

And when it comes to football, expertise is not monopolised. A person may be precariously employed, undocumented and racially othered in Fortress Europe, but there is no reason for her not to publicly assume the same right as a Swiss banker to analyse and debate a game, a team or a referee’s decision. At an academic conference, football is more likely to be the topic of lunchtime conversation than academic matters and a waiter is quite likely to have a better-informed opinion than a professor and to feel able to express that opinion confidently.

In a world where inequality is so profound and so effectively policed, administered and legitimated there is something utopian in the moments of transcendence that football can create.

And South Africa’s successful hosting of the tournament seems, for the moment at least, to have changed the representation of Africa in Western Europe. South Africa is everywhere – from the vuvuzelas echoing down the streets, the cakes in the colours of our flag in the bakers’ windows in Germany, South African musicians playing in small German towns and glamorous representations of Cape Town in fashion magazines to detailed reports in newspapers and documentaries on television.

South Africa, and by extension Africa, largely appears as competent, modern, and as a fun place with welcoming people. Stereotypes about our people, our food and even our weather have been and are being debunked daily.

The tournament has been seen as an opportunity to tell the world about South Africa. And the story it is telling is often taking the form of a refreshing change from the racist and patronising lens through which Africa has so long been represented in Europe. The images of helpless starving African children that used to be everywhere in Western Europe have been replaced with representations of Africans as speaking, thinking and debating adults as capable of good and evil as anyone else.

Fifa may own the administration of this global carnival that is the football World Cup. But the fact remains that it is a global carnival, made by ordinary people.