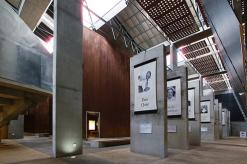 A section of the South African exhibit,
titled Ownership and Belonging, in the
2006 Venice Biennale.
(Image: Mphethi Morojele Architects)

South Africa has once again been invited to participate in the prestigious Venice Architectural Biennale, part of the Venice Biennale, one of the world’s most important contemporary art events. The Biennale takes place every second odd year, while the architectural exhibition takes place every second even year. The renowned Venice Film Festival also falls under the Biennale umbrella.

The theme for this year’s architectural exhibition is “Out there: architecture beyond building” and, according to the national Department of Arts and Culture, will help to expand possibilities within the field of architecture and explore the unfolding terrain of emerging identities and spatial practices in South Africa.

The Venice Biennale, which has taken place since 1895, was closed to Africa until 2006, when South Africa became the first African country to be officially invited to participate. The event attracts more than 100 000 visitors and 3 000 accredited journalists from around the world and is a high-profile showcase for the latest art trends around the world.

The architectural exhibition provides a platform for invited nations to show, through their own architectural practices, the trends, innovations and responses to the various factors that shape their built environment.

The 11th Architecture Biennale is curated by architect, author and lecturer Aaron Betsky, who since August 2006 has been the director of the Cincinnati Art Museum. It opens on 14 September and runs until 23 November 2008 in two venues, the Arsenale, which features 23 installations, and the Padiglione Italia where visitors can examine the experimental work of 55 international architectural firms.

The South African delegation, led by Deputy Minister of Arts and Culture Ntombazana Botha, attended the opening of the Biennale on 10 September. The delegation included South Africa’s Violin Tenors, a quartet of talented local classical musicians, who will perform during the exhibition, showcasing another facet of creative South Africa.

The architectural firm has accumulated extensive experience through previous work with large-scale projects such as the Cradle of Humankind and Hotel complex in Gauteng, the Freedom Park Museum and Garden of Remembrance in Pretoria, and the South African embassies in Ethiopia and Germany, and curated South Africa’s Biennale 2006 entry as well.

South Africa’s participation at the Venice Biennale offers an ideal opportunity to market the country as a preferred tourist destination and to set the stage for 2010. The South African exhibit will focus on the staging of the 2010 Fifa World Cup within an architectural context, examining how a global event such as the football world cup is giving rise to new forms of architecture and impacting on urban life in South Africa.

It will present an analysis of the transformation of the Beautiful Game into the most spectacular event ever hosted by the African continent, and will also provide details on how football spaces are important sites for the construction of local identity and popular culture.

Speaking at the opening of the first South African pavilion at the 10th Architectural Biennale in 2006, Botha said that the country’s participation was aimed at ultimately establishing a strong African presence in the international forum of the Biennale. “We hope that South Africa’s participation will open an avenue for future participation of other African countries.”

South Africa’s 2006 exhibit was intended as a reflection on how the country’s cities are changing – change that is driven by a firm awareness of the need to integrate formerly segregated spaces and the importance of reclaiming degraded spaces. The exhibit showed how architecture can be used to analyse the transformation of South African cities in both material and psychological ways in the years since the dawn of democracy.

Titled Between Ownership and Belonging: Transitional Space in the Post-Apartheid Metropolis, the exhibit focused on specific sites where a new South African urban identity was seen to be emerging out of the deliberately divided built environment of the apartheid era. The eight sites on show in 2006 were chosen for having successfully transcended this former unequal division.

They included Constitution Hill, which was formerly a prison and is now home to the Constitutional Court, the Walter Sisulu Square of Dedication, and the Metro Mall and Faraday Precincts. All of these are located in Johannesburg.

Other projects around the country included the award-winning Red Location Museum of Struggle in Port Elizabeth, Durban’s Warwick Triangle urban renewal project, and Cape Town’s iconic District Six, a historic residential quarter that was notoriously destroyed in the 1960s and is now being rebuilt, as well as the Philippi transport interchange, which accommodates rail, bus and taxi modes of transport and was designed for economic development of the area and as a boost for the informal sector.

“The then Apartheid Government successfully implemented a grand separatist socio-spatial environment, whose ramifications we continue to challenge today,” said Botha. “The central challenge for the new South Africa is the creation of a humane-built environment that transcends this past, focusing in particular on the sustainability, liveability and aesthetics of new patterns of social movement change and settlement.”