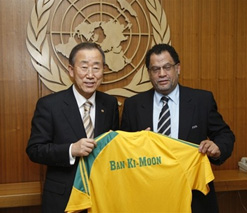 “There is great power in this. It is a time to present a different story of the African continent, a story of peace, democracy and investment,” Ban said at a meeting with Danny Jordaan, the organising committee’s chief executive, at a meeting at the UN headquarters in New York on 21 October.

Ban reminisced about his native Korea Republic co-hosting Asia’s first Fifa World Cup with Japan in 2002, saying the tournament was about far more than the 90 minutes on the pitch – it touched every corner of the globe.

Referring to Korea’s own history of conflict, he said the game of football, more than any other sport, united people and built solidarity and consensus. He said the 2010 event would do the same for South Africa.

Jordaan said the World Cup would play an important role in consolidating the new South Africa. “The World Cup is a dream that began in 1994, the first year of our democracy, and is part of our ongoing efforts as a nation to build unity in our country,” he said.

“Peace is not just the absence of war. Peace is creating circumstances that create hope. The legacy of this World Cup embarks on changing the circumstances of many people through its social legacy projects, job creation and advancements in telecommunications and infrastructure.”

It was an important week for the organising committee, with the European playoffs draw on Monday and Soccer City, the World Cup’s showpiece stadium, being inaugurated at a roof-wetting ceremony on Wednesday. The week also saw the General Assembly passing a unanimous resolution to endorse the 2010 tournament as a platform for social development and peace across Africa.

“The UN Secretary General must not only come to the continent when there is war, when he wants to talk about Darfur,” Jordaan said at a media briefing after the meeting. “He must come to Africa when Africa celebrates, when Africa excels. When there is good news, he must always be there.”

Baso Sangqu, South Africa’s ambassador to the United Nations, praised the support the General Assembly had given the country’s World Cup efforts.

“This resolution is the first of its kind and underpins the global support to the commitment of South Africa to not just make this another sporting event, but to ensure that it is based on the agenda for peace, development and stability for Africa – in the hope that these benefits will trickle through far beyond the final whistle,” he said.

“This resolution will continue to energise and engage the United Nations to walk this path with South Africa and Africa.”