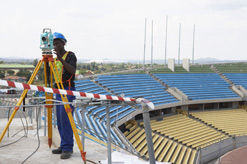 South Africa has received a pat on the back from the Union of European Football Associations (Uefa) for being on track with preparations for the 2010 Fifa World Cup.

At the recent Uefa Congress in Denmark, 2010 Organising Committee CEO Danny Jordaan updated the union about South Africa’s progress in preparing the country for the football event. Jordaan said stadium construction was on course and will be completed by October this year, in line with Fifa deadlines.  He also updated them about the country’s transport, safety and fan park plans.

Geoff Thompson, Uefa vice president, said he is impressed with the stadiums, the number of security personnel that will be deployed to secure the event and the country’s track record in hosting major events.  Thompson also said Jordaan’s presentation gives confidence to member associations that the preparations are going well.

South Africa’s ambassador to Denmark, Dolana Msimang, commended South Africa for its hard work. Msimang said she is proud of the country’s efforts to host the event.

German Football Association secretary-general Wolfgang Nierscbach said he was confident that the 2010 Fifa World Cup in South Africa would be successful and that it would hopefully change the world’s perceptions of Africa.

The demand for tickets also indicates that anticipation for the event is growing. Jermaine Craig, the 2010 Fifa World Cup Organising Committee media manager, said ticket sales for the 2010 sporting event have been satisfactory.

According to Jordaan the tournament is already oversubscribed – well over 800 000 applications have been received for the 743 000 tickets that have been made available in the first round of ticket sales.

At the Denmark Congress, Jordaan also assured Uefa that preparations are well under way for the Fifa Confederations Cup. All that remains are the finishing touches ahead of the event, which takes place in June this year.

Craig added that just under 200 000 Confederations Cup tickets have been sold and that companies and host cities have also been drumming up support for the event.  The majority of people who will attend the Confederations Cup will be South Africans.

“The World Cup and Confederations Cup fever is definitely building,” he said.

Craig added that the official opening of the Royal Bafokeng Stadium in Rustenburg ahead of the Confederations Cup has stirred up much excitement among fans. The Nelson Mandela Challenge between Bafana Bafana and Norway in the newly-completed Royal Bafokeng Stadium also gave fans a taste of what to expect in June and in 2010.

He said major football teams from Italy, Spain and Brazil will be playing at the event and football fans will miss out if they don’t support their favourite stars.

“Times are tough all over the world with the economic crisis, but these two sporting events will cheer up South Africans,” Craig said.