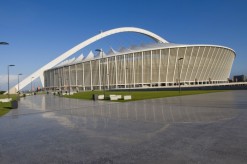 Fans attending World Cup matches need to have a clear idea of how they are going to get to the stadium, and back. Find out all you need to know here.

Approaching the stadium by public transport shuttles and by pedestrian access will be actively promoted, whilst heavy restrictions will be placed on arriving in private vehicles. Each stadium has a vehicle-free, pedestrian-only zone with the closest private vehicle parking areas normally located at least 2-3km from the stadium.

During the 2010 Fifa World Cup you can only access the stadium by private vehicle through the Park and Ride facility, or the designated Park and Walk sites, or if you have a parking pass issued with your hospitality match ticket. Unless you are planning to go to the stadium with a ticket for the match, try to avoid the stadium roads.

Each World Cup host city is responsible for the transport plans and communications around these plans for fans wanting to get to the city stadium.

Detailed 2010 World Cup transport plans for each host city can be found via the links below: