Gautrain will be running between
Sandton and the OR Tambo International
Airport in Johannesburg.
(Image: Bombardier) 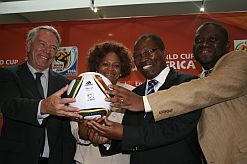 Government officials believe the transport
industry will meet the demand during
the World Cup. 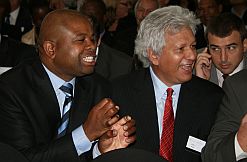 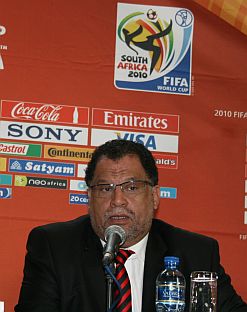 South Africa’s public transport is being beefed up ahead of the 2010 Fifa World Cup, and will be ready to serve thousands of people visiting the country for the football spectacular, government has said.

Minister of Transport Sibusiso Ndebele unveiled the country’s Transport Action Plan for 2010 at a media briefing at OR Tambo International Airport on 20 April. The plan details transport arrangements that have been put in place for the tournament and South Africa’s readiness to cope with the movement of fans, officials and players during the month-long period.

“We have constantly emphasised that the Fifa World Cup is not only about sport, it is also more about transport,” Ndebele said. “… We will put our best forward to ensure that all those who use our transport services are able to do so effectively and efficiently.”

Almost all modes of transportation available in the country, from air to road travel, will be widely used during the tournament. The Department of Transport, both at national, provincial and local level, has set up various projects to run from as early as 1 June to 31 July.

Through the newly formed Operating Managing Entity, the department will facilitate the movement of fans to and from stadiums. The scheme will be responsible for a fleet of 110 79-seater Man Lion Explorer luxury buses “specially procured by government for this event”, Ndebele said.

The vehicles, which have already been delivered, form part of a greater fleet of 570 buses to be procured from Man and Mercedes-Benz, all to be used during the World Cup. The entity will also run 800 smaller “midi-buses”.

There will be inter-provincial and regional luxury bus transport as well, with pricing ranging between R140 (US$18) and R300 ($40) for a one-way ticket.

More than 1 000 drivers will be recruited for the bus fleet, said Ndebele.

The Bus Rapid Transit (BRT) system is already operational in Johannesburg, the city that will host the most matches, including the opening and the final. The BRT, dubbed Rea Vaya, operates along dedicated lanes and is currently shuttling people from Soweto to a station closer to Ellis Park Stadium. It will also have a station next to Soccer City, making it easier for fans to reach the action there.

Minibus taxis are expected to play a crucial role during the tournament, transporting fans within the host cities. A project similar to Gauride, which Gauteng province set up during the Fifa Confederations Cup in 2009, is expected to involve the entire industry. Last year’s scheme roped in scores of taxis to efficiently transport fans to stadiums in Johannesburg and Pretoria.

Trains are also being lined up to transport football fans. Ndebele said the Passenger Rail Agency of South Africa will arrange 418 dedicated trains for the tournament. “We want to encourage travel by train during the World Cup,” he said.

Metrorail trains are expected to play a more critical role in Gauteng to get fans to Ellis Park in Johannesburg via the renovated Doornfontein Station, which joins the stadium’s precinct.

Loftus Station is linked to Loftus Versfeld, Pretoria’s host stadium, and provides a simple gateway. Nasrec Station, currently undergoing a revamp, will be ready in time and will provide easy access to Soccer City.

Plans are also in place to avoid massive train delays, according to Ndebele. “A multi-disciplined operational team is currently working on the issue of train delays in certain areas.”

The multimillion-rand Gautrain will be up and running during the tournament, with the first phase starting to operate between Gauteng’s Sandton and OR Tambo International Airport in June “to improve mobility of fans and tourists”. The entire project is set to be completed by December 2010.

Most airports in the country have been revamped through projects worth billions of rands ahead of the World Cup. The upgraded facilities include two international hubs, OR Tambo and the Cape Town airport, and a range of domestic terminals. The new King Shaka International Airport in Durban, KwaZulu-Natal, will be operational by 1 May.

Airports Company South Africa has said that all airports will be ready to accommodate the crowds of people expected to visit the country between June and July.

Call centre to speed up mobility

Government will launch its Transport Command and Call Centre programme in June. The project, to be run from Gauteng, includes a national transport command centre, a call centre and an “interactive” website.

The aim is to ensure that “as many people as possible, both locals and foreigners, are able to conveniently access information that will make their lives easier during these exciting and busy times”, Ndebele said.

The call centre, which will be open 24 hours a day, will give out information on available transport options and other traffic matters related to the World Cup. It will operate between 1 June and 31 July. The website www.findyourway2010.co.za, which is already running, will also provide relevant information.