Johannesburg’s roads have become even
busier. 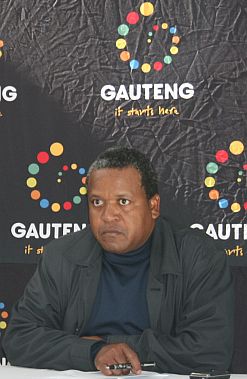 Gauteng spokesperson Thabo Masebe at a
media briefing in Sandton. 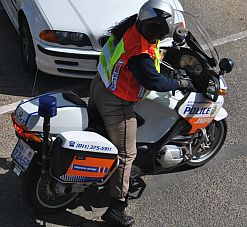 The 2010 Fifa World Cup has almost brought Johannesburg’s traffic to a standstill, an indication of the multitude of fans of the beautiful game that are in the city.

On match day in the host city, capital of Gauteng province, main roads got congested as fans flock to its two magnificent stadiums, Soccer City and Ellis Park.

It was an even worse scenario on 11 June, when the tournament kicked off at Soweto’s Soccer City. The Gauteng provincial government admits that traffic management was not at its best; the chief cause was the presence of private cars in the vicinity of the stadium.

“The highways were congested… people were stuck in traffic,” said Thabo Masebe, the province’s spokesperson. “Traffic is of great concern to us.”

With congestion starting from central business areas such as Braamfontein, people struggled to make their way south of the city, even hours before the opening ceremony began.

“There’s no way you can have thousands of cars going to Soccer City.”

Besides staging the opening match, the world-famous city will host the final. It’s already hosted a match featuring the thrilling Brazil, which saw the theatrics of Robinho leading the South Americans to a 2-1 thrashing of North Korea.

The problem, Masebe noted, is that football fans want to drive to the venues, instead of using public transport. Gauteng’s plan is that fans should use the transport laid on for fans, such as public buses, trains and minibus taxis.

Public transport provided for the duration of the World Cup in the province is adequate and reliable enough to carry the scores of fans, said Masebe. “We’ve provided enough public transport, and we encourage fans to use it.”

While Rea Vaya charges a minimum fee of R6 (US$0.79) per trip to both Ellis Park and Soccer City, trains provide free shuttle for fans with match tickets. Metro buses ferry fans from Park and Ride facilities in different parts of the city, for free.

“There’s no way you can miss a train going to the stadium,” Masebe said.

The provincial government has decided that it will close off certain roads to private cars in the city centre and main routes leading to the stadium. The roads will be closed and manned by traffic officials four hours before a game kicks off.

Road closures will not inconvenience motorists when there are no matches. “On other days the roads will be open,” said Masebe.

The Soweto Highway and Nasrec Road, main routes leading to Soccer City, will always be closed to the public on match day.

Only private vehicles carrying VIPs, Fifa officials, and players, and other accredited cars will be allowed entry into the roads.

“If [traffic police] find a car where it’s not supposed to be, they will impound it and you would have to pay a fee,” said Masebe.

The province’s aim is to ensure free flow of traffic in both Johannesburg and Pretoria throughout the tournament. “Nobody should even think about traffic. It must run smoothly… We want to ease the flow of traffic,” Masebe said.

There have been no major incidents of crime reported in Gauteng, contrary to speculation before the World Cup started.

Police maintain a high visibility in many areas, especially those around high-volume venues like stadiums and public viewing areas. The men in blue have also taken control of all security in Soccer City and Ellis Park.

“We have sufficient capacity to provide security,” said Masebe. “The police have enough capacity to deal with any situation.”