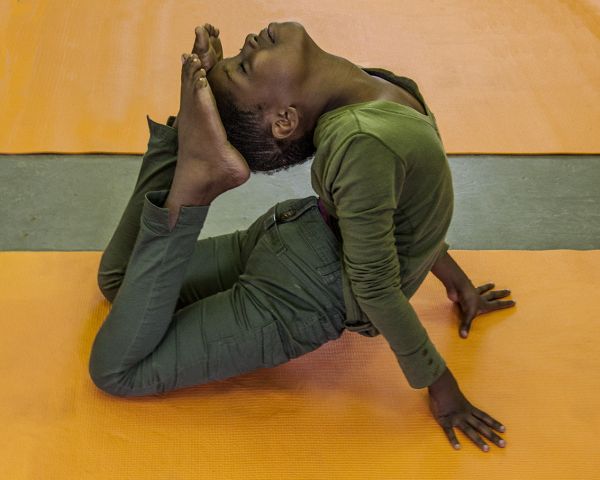 • Andy Birkett gets his green number, at 23
• Johannesburg bikes for Madiba in the Freedom Ride
• In the swim of things at the Midmar Mile
• Sithole: SA’s wheelchair tennis champion wins again

Township and yoga are not two words that naturally go together, but for Elle Matthews yoga in townships has become a way of helping others to live more peacefully in extremely stressful conditions.

Matthews, a film producer with Green Shoot Films, launched the Township Yogi Project in February last year in three townships in Durban, the sub-tropical coastal city where she lives – Inanda, KwaMashu and Ntuzuma. And now, a year later, she has 17 people on her team, 14 volunteer teachers, and up to 60 people attending classes on a weekly basis in just one venue.

“We decided to focus on the townships of Inanda, KwaMashu and Ntuzuma in KwaZulu-Natal, notorious for their crime and violence and HIV/Aids incidence, and then roll out the project into other townships across South Africa,” says Matthews, who has registered the project as a non-profit organisation.

How did this all come about? In 2012, she went on a 10-day yoga retreat to Thailand – “those 10 days changed my life”, she explains. She became increasingly aware of desperate people sitting on the curbs, looking for jobs. “Or the despair of people I knew who lived in the townships and were victims of crime and violence, or living with the effects of HIV/Aids in their lives. I kept saying to my husband, ‘They need to do yoga.'”

She got together a group of volunteer yoga teachers, and teaching started at the Ohlange Institute in Durban, a place of some significance. Nelson Mandela cast his first democratic vote at the institute in 1994. It is also the place where John Dube, the first president of the African National Congress, opened a school. The yoga classes were also held in Aids clinics and community halls. 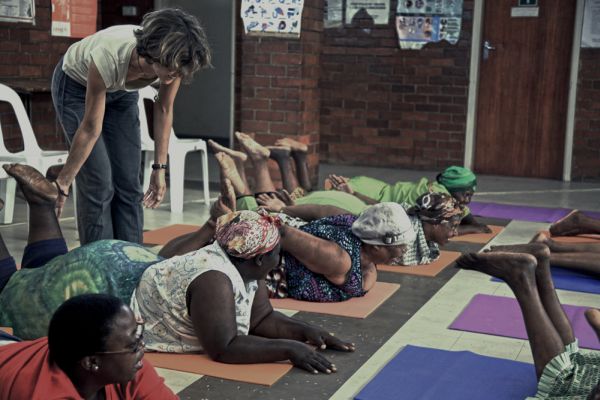 Women in their 60s get down on the mat to enjoy the benefits of yoga. (Image: Green Shoot Films)

“At the same time, we identified four guys living in the townships – who all have various stories of hardship and suffering – and began training them as yoga teachers through the Jivananda Centre in Durban North,” says Matthews. They completed the course in December 2013, and are now running their own yoga classes.

Matthews has extended the project into northern KwaZulu-Natal, and she plans to launch in Soweto in Johannesburg in the coming months, and Cape Town later this year. Classes are run from Mondays to Saturdays. More women than men attend, with ages ranging from four years old to 70. Some gogos, or grandmothers, walk to class using walking sticks. There are also special classes for children.

Matthews and her director husband have funded the project through their film company so far, with some donations. They are making a documentary on the project, and have big ambitions for it. “We are looking for international distribution for the documentary, but it will also be sold through non-traditional distribution methods such as DVD, internet downloads etc,” she says. “We are also aiming to get corporates and smaller companies to sponsor DVD copies to be distributed into townships, so people can become aware of the power that yoga has to change lives.” The documentary will be called Township Yogi. Profits from the film will go towards the project.

And already the benefits are being felt. “One of our newly qualified township teachers suffered from tuberculosis [TB] and the nurses at his local clinic told all the patients there to go with him to yoga because they had never seen anyone recover so fast from it and become so physically strong within such a short period after suffering from TB.”

Kwazi Manzi, 47, has qualified as a teacher. He describes how it has given him “confidence, perseverance and understanding”. “I feel physically and mentally connected – it brings peace, and tones your muscles.” He says, too, that it has changed his life – he now looks at things more optimistically, and can “inspire others to do good”.

Another new teacher, Kenneth Shange, says he hopes to bring “peace and healing to his community”. Matthews says it is stories like these that give her and her team inspiration, and “confirm to us that yoga has the power to elicit tremendous change across so many people’s lives, in the townships”. 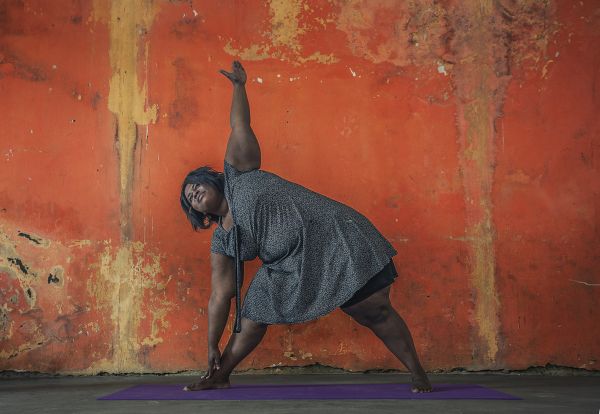 The effect of yoga is seen in a reduction of stress and tension in families, and how that effect ripples through people’s immediate communities. (Image: Green Shoot Films)

And that change has been measurable, she stresses, although it is impossible to measure its effects on crime and violence in the townships. But the effect is seen in a reduction of stress and tension in families, and how that effect ripples through people’s immediate communities.

“Our goal is not to change townships, but rather to change individuals who live in those townships – and then the spirit of the townships will change. We want to change hopelessness and desperation to peace and hope, ill health and suffering to strong, empowered people who can face their ill health and difficulties with true strength of spirit… that’s the kind of change we’re seeing because of the power of yoga.”

The practice teaches people to breath correctly, as well as strengthens the immune system, thus reducing stress. “Yoga promotes strength, flexibility, relief from pressure on the abdominal organs, and enhances circulation, and can be hugely beneficial to the millions of people we have living with illnesses such as TB and HIV,” says Matthews.

“Ultimately we want to use the benefits of yoga on people suffering in various desperate situations, and see whether it can be used as a practice to improve their health and quality of life – which could have huge consequences for South Africa going forward, as the country struggles to manage its Aids crisis, as well as rising poverty, unemployment, crime and violence statistics.”