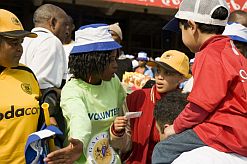 The programme was launched on 12 April by the province’s department of economic development and tourism.

Speaking at the launch, department minister Mike Mabuyakhulu said, “Our province attracts 1.3-million inbound tourists, but we believe we still have to realise our full tourism potential.”

Durban will host seven World Cup matches and expects 100 000 visitors during the tournament. Mabuyakhulu said they want to make the tourists feel welcome and provide quality service to all visitors.

“The buddies will be expected to foster the spirit of unconditional, collective hospitality in KwaZulu-Natal by improving the service standard,” he said.

The volunteers that are due to undergo training are people from rural areas and those currently working in the hospitality industry. They include hotel staff, car guards, petrol station attendants, and restaurants.

“The stark reality is that, given the intense competition from other provinces and other countries, we need to up our game in order to increase our tourism share,” said Mabuyakhulu.
“With its fascinating mix of tourist drawcards, KwaZulu-Natal is well positioned to hold its own in the highly-competitive global tourism industry,” he said.

According to the department, tourism is one of the fastest growing sectors in the country, and is increasingly providing employment to South Africans.

KwaZulu-Natal contributed an estimated R18.3-billion ($2.5-million) directly to the national economy, and more than R26-billion ($3.5-million) indirectly during this period.

Mabuyakhulu said in order to continue growing the country’s economy and tourism in KwaZulu-Natal, all the people of the province should be tourism ambassadors.

Themba Ngobese works at a Durban hotel along the beachfront where most of the province’s top hotels and restaurants are located. “I am hoping to be part of the tourist buddy programme – it would be a great opportunity to be part of this international event, the first African football World Cup,” he said.

Ngobese said if South Africans are good to the tourists this would help get rid of the negative stereotypes perpetuated by the media. “There are too many bad things being said about our country leading up to June when the tournament begins. It’s up to us, as the people who will have direct contact with foreign visitors, to prove those stereotypes wrong, and show our visitors the warmth and love that drives Africa.”

His co-worker Nontobeko Hlophe agrees. “We are very excited about the World Cup and would love to work with the department to ensure that it is a success.” Hlophe said it is important to make tourists feel safe and welcome in South Africa, particularly in their province, during the World Cup.

“If we can do well in accommodating the tourists it would give our province a good rating and tourists will hopefully flock here even after the World Cup.”