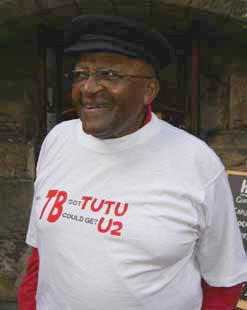 Desmond Tutu was himself a TB patient as a child. 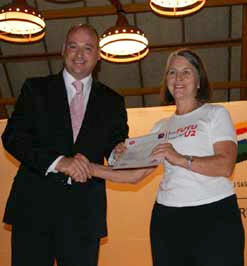 DTTC director and founder Nulda Beyers receives the award of recognition from the City of Cape Town in 2010. 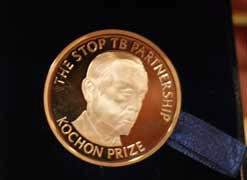 The Kochon prize was given in recognition of the DTTC’s commitment to and excellence in fighting childhood TB. 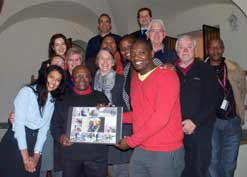 The Cape Town-based Desmond Tutu TB Centre (DTTC) has won a prestigious global accolade for its work, a welcome nod of approval for those working to help reduce infections of the lung disease among children in South Africa and the rest of the developing world.

According to the World Health Organisation’s (WHO) Global Tuberculosis report of 2012, an estimated 64 000 children worldwide died from the disease in 2011 alone, while half a million are infected.

Prof Anneke Hesseling, director of the paediatric programme at the Stellenbosch University-based centre, received the Stop TB Partnership-Kochon Prize on 13 November on behalf of her team. Hesseling was part of a delegation to the 43rd Union World Conference on Lung Health in Kuala Lampur, Malaysia, during which the awards ceremony was staged.

The conference is the world’s biggest meeting on lung diseases and is attended by representatives from over 150 member countries of the International Union Against Tuberculosis and Lung Disease.

Over 30 delegates participated on behalf of the DTTC in a range of activities, including presentations, workshops, symposia and discussions. Hesseling delivered one of the highlight sessions, on childhood TB, to close off the conference on 17 November.

“The award is not about just one person.” said Hesseling, “it is the result of a group effort and years of hard work in research and treatment programmes.”

The team celebrated their achievement – which included a cash prize of US$65 000 (R573 200) – by treating themselves to the Southeast Asian country’s sought-after cuisine.

A common sense of dedication

Although the centre, in its current form, has been around since 2003, it was preceded by many years’ worth of research by Stellenbosch University staff. Hesseling described the progress as the result of a common sense of dedication among people who are passionate about eradicating TB among children.

“Long before the centre was formed, research was being done on the subject, and people were taking over the baton from others over the years.”

Based in Tygerberg, Cape Town, the centre works in several key fields related to the disease and provides care to children with TB, and babies born to HIV-positive mothers, around the city. It is named after one of South Africa’s best known freedom struggle icons and 1984 Nobel Peace laureate, Archbishop Emeritus Desmond Tutu, who remains an active patron.

“Childhood TB is one of our key focus areas, but we work across several others because the disease continues to be a burden for communities, given its infectious nature,” explained Hesseling.

TB in children, she said, can be regarded as a ‘litmus test’ to what is going in the rest of the community. “Because they are generally more susceptible, it is through them that we are able to see how deep the problem runs.”

From a social point of view, the challenge is to increase the number of reported cases in the community. Many people do not come forward for help, even when symptoms suggest the need for urgent medical attention – a problem that DTTC director and founder Nulda Beyers attributes to the stigma still attached to HIV/Aids.

“People suspect they have TB, but are scared to go to the clinic because they might also have HIV,” she said in an interview about one of their community campaigns.

Childhood TB on the agenda

Hesseling believes that researchers are getting closer to an accurate picture of what South Africa is dealing with and therefore what needs to change in terms of government policy. The country is among WHO’s list of the 22 most TB-burdened counties in the world.

The DTTC’s work has not gone unnoticed by the government – two years ago the City of Cape Town’s health services department bestowed an award on the team for excellence in contribution.

For this, said Hesseling, they were grateful, because it meant that they have credible support and that they are working within structures that can only improve going forward.

“It also helps to put childhood TB on the public health agenda,” she said.

A case for childhood TB funding

As many as 500 000 children are diagnosed with TB around the world every year. Thousands succumb because health practitioners find it hard to detect it in toddlers. According to WHO, a majority of developing countries still use a method of detection first established over 130 years ago: the patient has to cough up a sample of sputum for testing.

The world health body has called for a test that is easy to use and non-invasive to children, but concedes that research funding remains a challenge.

Another aspect that needs urgent attention is detection of TB in pregnant women, especially those who are HIV-positive, as they are highly susceptible to infection during pregnancy. TB is the leading infectious cause of death during pregnancy for this group.

Hesseling’s team works towards capacity building in the communities around the city, including the townships of Langa, Khayelitsha and suburbs in the Cape Flats, where sustainable treatment methods are key to keeping infection numbers down.

While acknowledging the importance of community-based approaches such as those of the centre, WHO asserts that the best treatment, following diagnosis, is a vaccine that will work well for both children and adults. The commonly-used Bacillus Calmette- Guérin, or BCG, offers only limited protection and is unsafe for HIV-positive children.

According to WHO, Cambodia’s rate of prevalence has dropped by 45% since 2002. This good news story stands as a benchmark among the countries on the top 22 list, particularly given Cambodia’s low-income background.

Although more is being done by initiatives such as the DTTC and others, the burden of TB is still a sad reality for South Africa and the rest of sub-Saharan Africa.

In the context of the developing world, South Africa is proportionately worse off. The country has a fraction of the populations of China and India, but its ratio of infected vs healthy people is higher.

“For example, we have three times the number of cases that Zambia does,” said Hesseling, adding that more than 60% of these are HIV-positive. Zambia has a population of 14-million, compared to South Africa’s 51-million, but is successfully treating a proportionally higher number of cases.

A 2008 report by the Southern African HIV and Aids Dissemination Service (Safaids) points towards the parallel treatment of TB and HIV as the cause for the delay in progress.

The problem with this approach is that the two diseases are treated as separate responsibilities, despite evidence proving their interlinked nature. Safaids suggests the Stop TB strategy, which is recommended by WHO, to help reverse the scourge of the disease in the region.

Its partners include the Bill and Melinda Gates Foundation, the National Institutes of Health, and Pepfar, among others.

Only applications sent to Stop TB are eligible for the prize. The applicant must be nominated by a recognised national health body, a partner of Stop TB, or a previous recipient of the award. Candidates may not nominate themselves, and applications should reach the organisation’s headquarters in Switzerland by September.

The judges then have until November to deliberate, keeping several factors in mind: the nominated organisation or individual must have exceptional commitment to the global fight against childhood TB; the extent of the originality and potential impact of the nominee’s work to advance childhood TB on the global agenda; and the extent to which a Stop TB Partnership/Kochon Foundation Award might contribute to furthering the nominee’s work.

In a video message uploaded to YouTube by Stop TB, Tutu expressed his gratitude towards the organisation, saying it gives a voice to those who would otherwise go unheard.

“This generous award will allow us to continue our work, saving the lives of children with TB and seeking solutions we believe can culminate in a world free of TB,” he said.

Tutu added that it’s good to see that awareness of childhood TB is on the rise, as most people do not know the extent of the burden of the disease.

The retired clergyman himself suffered from TB as a child, and was delighted to become involved with the centre when it was established.

“TB is often tragic in children because they are prone to getting very severe forms of the disease that affect the brain and the spine,” said Tutu, “and can leave them paralysed or mentally disabled.