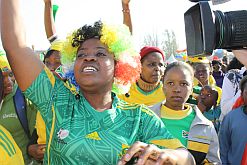 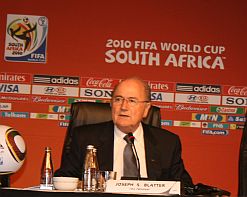 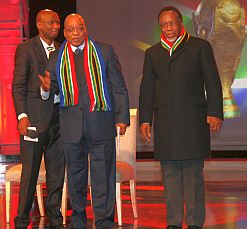 South Africa has come out with flying colours for hosting one of the most successful World Cups of all time.

This was announced by Fifa boss Sepp Blatter at a press briefing in Johannesburg on 12 July – after a glittering closing ceremony and nail-biting final match between the Netherlands and Spain the night before.

Blatter has given the country nine out of 10 for organising the tournament with such flair. This means we got 90% for the job, as far as the international football body is concerned.

Blatter said this was the most favourable rating possible, because “perfection does not exist”.

The rating is based on all the Fifa requirements South Africa had to meet for the tournament to be classed as a success. With the billions of rands that went into preparations, the nation did all it could to please the Swiss-based organisation.

“Compliments to the government for all the guarantees they gave and met,” Blatter said. “We trusted South Africa and we at Fifa are satisfied.

“They can be proud. The compliments must go to South Africa, and not Fifa,” he added. “Africa has proven that it can host such a huge event.”

In total, government spent about R28-billion (US$3.7-billion) on infrastructure development and upgrades ahead of the spectacle, with a firm focus on stadium-building, transport and crime-prevention.

Thanks to this, South Africa is now home to 10 world-class stadiums – five of which were built from scratch. More than R9.8-billion ($1.3-billion) went into the construction and refurbishment of these facilities, and the development of precincts around them.

The eye-catching calabash-shaped Soccer City in Johannesburg was completely upgraded, after the older stadium on that site was dismantled. Nelspruit and Polokwane also scored impressive new stadiums, as did Cape Town, Durban and Port Elizabeth.

Almost 3.2-million spectators poured into the 10 stadiums during the month-long tournament – this is the third highest attendance in the history of the World Cup, after the US-hosted one in 1994 and Germany’s in 2006.

Government beefed up public transport to accommodate football fans by pumping more than R11-billion ($1.5-billion) into the sector. R6.7-billion ($8.83-million) went towards the new King Shaka International airport in KwaZulu-Natal, while OR Tambo International in Johannesburg and Cape Town International received massive facelifts. All these facilities were ready in time for the kick-off on 11 June.

Five other domestic airports – including the one in East London – were also upgraded, while the new Bus Rapid Transit system and Gautrain in Johannesburg successfully ferried thousands of fans around the city.

“The World Cup did not compromise the focus or the funding that we have maintained since 1994 on improving the health, safety, education and economic well-being of our people.”

But, “bringing this event to the country compelled us to fast-track certain aspects of the country’s development”, he added.

Government is also confident that the 2010 projects will benefit the country in the future: “We are sure that the investments we have made will contribute to increased tourism, trade and investment,” the president said.

“This will ultimately create the opportunities and bring in the revenue for us to address social challenges.”

South Africans’ welcoming spirit shown throughout the World Cup should also be applauded, said Blatter. “The wonderful hospitality given by the people … is something that has been great,” he said.

The country proudly defied some absurd expectations of the foreign media, particularly those of the UK tabloids, which, before the tournament, warned of machete race wars in the streets, poisonous snakes at the stadiums – and even an earthquake that would hit South Africa!

Mercifully, these ludicrous suggestions weren’t taken seriously by the legions of fans who came to the country.

Government did its best to prevent common crimes by getting the South African Police Service to deploy 41 000 officers specifically for the World Cup, while working closely with international security agencies.

There was a large security presence on the streets and at many venues, including stadiums and public viewing areas. Police were also deployed at the hotels where players and dignitaries stayed.

“We have to congratulate the police services for what they have done,” Fifa secretary-general Jérôme Valcke said. “They’ve done more than we expected.”

International security agencies “were highly impressed by the performance of our enforcements”, according to South Africa’s deputy president, Kgalema Motlanthe.

All this praise and positivity was well expressed by a BBC journalist at the press briefing, who said: “No one doubts that this has been an incredible World Cup organised by South Africa.”