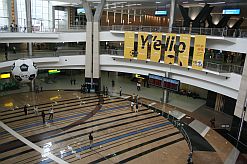 The new central terminal building at OR
Tambo International Airport has a
wide-opened concourse. 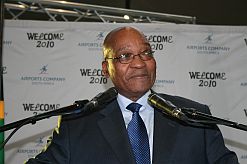 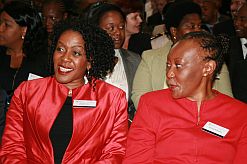 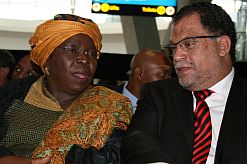 South Africa’s OR Tambo International Airport, the largest on the continent, has been revamped and extended to include a new terminal building worth R2.2-billion (US$296-million).

“We have every reason to celebrate achievements such as the completion of the extension of this airport as it is a significant milestone,” said Zuma. “Our vision of a truly international airport has been realised, with the completion of [this] R2.2-billion central terminal building.”

The 98 600m2 facility is the largest Airports Company South Africa (Acsa) has ever built, and embodies the transformation of the airport since 1995, the organisation said.

With a wide concourse and 75 check-in counters, 33 lifts, 34 escalators and two 90m-long baggage carousels, the building has been expertly designed to speed up luggage collection and passenger movement.

“The construction of this facility placed emphasis on the creation of spaces specially designed to ensure efficient and pleasant airport experiences for all our users,” said Chris Hlekane, the airport’s general manager.

It also boasts 10 000m2 of shop space, most of which is already occupied by local and international retailers.

Construction of the terminal was completed in December 2009 as a portion of the general R5-billion ($673-million) upgrade to OR Tambo International, which was known as the Johannesburg International Airport until 2006.

A new multi-storey parkade, which cost R496-million ($66.8-million), was completed in March. It can accommodate about 5 200 vehicles, bringing the total number of parking bays at the airport to 17 500.

Seven new aircraft parking stands worth R154-million ($20.7-million) have also been added, bringing the total to 105.

Two 6000m3 tanks have been installed to increase fuel-storage capacity at OR Tambo International, and together they can hold 60-million litres of fuel.

“The upgraded facilities are the all-important first impression of not only OR Tambo International Airport, but also South Africa,” said Hlekane. “It was therefore vital that we provide a world-class African airport with cutting-edge international transport facilitation abilities, technologies and design.”

Given the recent developments, the airport is now able to accommodate about 28-million passengers per year.

Acsa has upgraded other South African airports as well, both domestic and international, which will play critical roles during the tournament. Cape Town International Airport has undergone a multibillion-rand revamp, while the all-new King Shaka International Airport is ready to begin operations on 1 May in KwaZulu-Natal.

The domestic airports in Bloemfontein, East London, Upington and Kimberley have also been upgraded to accommodate World Cup traffic.

“The transport sector, in this specific case the aviation [industry], will rise and fly to the greatest heights to meet our obligations to host the most successful 2010 Fifa World Cup ever,” said Sibusiso Ndebele, South Africa’s minister of transport.

OR Tambo airport is named after Oliver Reginald Tambo, a late anti-apartheid icon who was president of the African National Congress from 1967 and 1991. Tambo is best known for his ongoing efforts to get the international community to sanction South Africa’s former apartheid government.

“[Tambo] travelled all over the world to communicate the vision of a free, non-racial, apartheid-free, democratic South Africa,” said Zuma. “It is therefore appropriate that this facility, which represents a convergence zone for people from all over the world, is named after this national and international hero.”