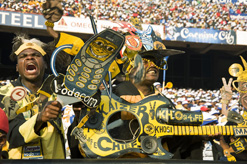 South African health authorities have reassured football fans that the global outbreak of swine flu will not derail this year’s Confederations Cup. A wide-ranging plan of action is in full swing to prevent the disease, which originated in Mexico and is now known as Influenza A(H1N1), from reaching the country and spreading in the region.

South Africa is due to host the 2009 Confederations Cup from 14 to 28 June. The tournament, which pits eight of the world’s top teams against each other, is viewed as a precursor to the 2010 Fifa World Cup.

World football body Fifa, under whose auspices both events are held, has announced that it is monitoring the flu situation and will only postpone the tournament if absolutely necessary.

Fifa secretary-general Jerome Valcke said that he hopes the situation will be under control before national teams are due to travel to South Africa.

“We will cancel only if we feel that we have to. If there are no risks and if we have all the necessary assurances, the competition will go ahead.”

Task teams from the health, environmental and security sectors have leaped into action to combat the swine flu threat, with environmental experts, veterinary surgeons, the defence force, and epidemiologists on the alert for any sign of H1N1.

Measures are in place to stop possibly infected patients at all points of entry into the country and response teams are standing by in all provinces.

World Cup Local Organising Committee CEO Danny Jordaan confirmed that preparations for the tournament were going ahead and that all stakeholders were working closely together.

“At this stage our position is quite clear … the Confederations Cup will go ahead as planned,” he said.

Authorities have assured the public that while there is no need for panic, people should not become complacent – good hygiene should be practised at all times, and medical help must be sought if any flu-like symptoms develop.

Frew Benson, chief director for communicable disease at the national Department of Health (DoH), said South Africa is approaching its annual flu season, and that people are more likely to contract normal flu than swine flu.

He added that the best way to prevent the spread of any kind of flu is for sick people to be responsible and to distance themselves from others by staying home and getting treatment.

The DoH has activated its national influenza preparedness plan, which was drawn up in 2007 in response to the avian flu scare that swept the world that year. According to Benson, the mortality rate of H1N1 is lower than that of avian flu.

The national plan outlines the steps to be taken in the event of a flu outbreak and is operational in all nine provinces. Strategies include the monitoring of communicable diseases within provinces, investigation of suspected cases, and appropriate response to each case.

South Africa’s line of defence includes the deployment of thermal scanners at the country’s three major international airports (OR Tambo, Cape Town and Lanseria, which had one in place before the outbreak), as well as plans and facilities to quickly isolate any confirmed airport cases at hospitals nearby.

At around US$67 000 (R500 000) each, the thermal scanners used to detect raised temperatures due to illness in humans are expensive, but have a longer-term use in detecting drug smugglers, who present higher temperatures because of anxiety.

The DoH has a stockpile of Tamiflu antiviral medication, enough to treat 100 000 patients. Tamiflu is an effective treatment for avian flu but can also be used to combat H1N1. It is believed that the private sector has an even bigger stockpile of at least 200 000 units.

The World Health Organisation is currently working on the development of an H1N1 vaccine, but says that this can take up to six months. Regulatory approval will be undertaken alongside the manufacturing process, and the virus will be closely monitored in future to enable a quick response to any mutation.

Other actions within South Africa include comprehensive and compulsory medical questionnaires for all international arrivals, especially from affected countries; funds set aside to boost antiviral supplies if necessary; medical check-up at airports, including temperature monitoring, of those suspected of being ill; more equipment; and a virus hotline for professionals.

The African Union also announced contingency plans in place in many countries and while they are not all as drastic as Egypt’s pig slaughter programme, they indicate the continent’s readiness to take on the global threat.

Ghana and Gabon have stopped pork imports altogether, and Kenya, Mauritania, Senegal, Zambia, Zimbabwe and other countries are also monitoring airports and ports.

No cause for alarm

H1N1 has not reached South African shores. Two travellers with flu-like symptoms were quarantined for tests at the end of April – both have tested negative, meaning that to date there is no swine flu in South Africa.

In addition, says the DoH, the Department of Agriculture has reported no cases of swine flu among pigs in the Southern African region. As the virus cannot be transmitted through eating pork, the DoH has hastened to assure consumers that it is safe to carry on eating the meat although, as with all prepared food, it should be cooked properly.

The latest status report from the World Health Organisation confirms this. Of the 20 countries who have officially reported cases of H1N1 so far, there are none on the African continent. The world health body has not issued any travel restrictions related to the disease.

The possibility is now being mooted that Mexico had overreacted to the swine flu outbreak, portraying the disease as more deadly than it actually is. At the time Mexico reported around 60 possible deaths as a result of swine flu – the number has since been revised to an official 25, reports the World Health Organisation. According to health experts, this is congruent with normal seasonal flu.