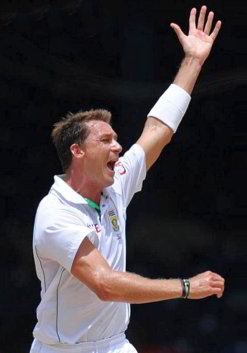 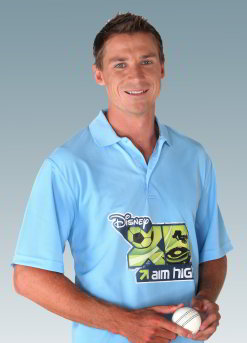 Steyn will mentor one cricket-mad child
for a day.
(Image: Taryn Fritz PR)

Steyn will spearhead the third phase of the campaign by spending a day with a lucky South African youngster, acting as mentor and sharing some of his cricketing skills.

Aim High is an international campaign that motivates young people around the world by putting them in touch with their heroes in the fields of sport, music, media and entertainment and, in so doing, inspiring them to realise their own potential.

Youngsters who have a dream to succeed in any of these fields stand to win the chance to spend time with their mentor and two so-called mini mentors, learning about the attitude that helped them to get to the top. Disney XD plans to offer this unique prize every three months.

The programme kicked off in South Africa in July 2011, with Idols 6 winner Elvis Blue as the role model, and the second phase, launched towards the end of the same year, saw popular rugby prop Tendai “Beast” Mtawarira giving a glimpse into his life as a professional sports star.

Right-arm fast bowler Steyn, who bowls at speeds in excess of 150 km an hour, was chosen by the Walt Disney Company as he is currently at the height of his career and a perfect role model for youngsters who aspire to enter the international cricket arena.

Joining Elvis Blue and the Beast

Young Khethelo flew to Johannesburg to be with his hero, and also won a front-row seat to see Blue open for UK superstar James Blunt, who was performing in South Africa at the time.

Also taking part in the second phase of the campaign were photographer Herman Verwey and sports journalist Carlos­ Amato.

According to Disney, the object of the campaign is to use world-class performers in various fields to inspire young people to do what they love and love what they do and to aim high in whatever field of endeavour they choose.

Steyn says mentors played a huge role in his career. “I had many idols when I was growing up and through hard work and passion I managed to be able to play with them. Hopefully I can inspire someone to get to the dreams that they have set for themselves.”

The bowler adds that he’s thrilled to be part of an initiative which inspires children to try new things and think about the numerous opportunities available to them.

“You too can do it,” he promises youngsters.

To enter, fans simply need to visit the Disney XD Aim High microsite or go to MXit > Tradepost > Entertainment > Disney > Disney XD before 28 April, answer a multiple choice question and then say why they should be selected for this life-changing opportunity.

Steyn started his cricket career in the small mining town of Phalaborwa in Mpumalanga, at the edge of the Kruger National Park, the jewel in the crown of South Africa’s wildlife reserves.

He made his national debut in 2004 and today Cricket South Africa describes him as having the complete package – pace, speed and swing – that makes him a lethal force as leader of the Proteas’ attack.

In 2008, after he had taken 80 wickets between October 2007 and August 2008, the International Cricket Council (ICC) named him Test Cricketer of the Year.

This achievement also earned him the world number one ranking, a position he has held since then. He has also been selected as a member of the ICC Test Team of the Year for the past four years.

With a wicket tally of more than 200, Steyn has the highest strike rate of any test bowler with similar figures.

One of his best all-round performances to date was in the 2008 test match in Melbourne, Australia, where he showed his mettle not only with the ball but also with the bat. His match-winning score of 76 and partnership of 180 for the ninth wicket with JP Duminy was the cherry on the top of the 10 wickets he took during the match.

When not playing for the Proteas he can be seen on the field for the Cape Cobras, based in Cape Town.