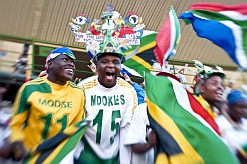 The 2010 Fifa World Cup will kick off in
style with a spectacular concert the day
before the opening ceremony. (Image:
Chris Kirchhoff, MediaClubsouthafrica.com.
For more free photos, visit the image library)

RELATED ARTICLES
• Football for Hope to unite SA
• Get kitted for Football Fridays
• Artificial fields for SA footballers
• 2010 to give SA a $2.5bn boost

The first Fifa World Cup ever to be held on African soil will kick off on 11 June 2010, and to celebrate Fifa is organising a spectacular concert featuring top international and home-grown stars.

The world football body has hired global eventing company Control Room, headed by Kevin Wall, to organise the show for the day before kick-off, 10 June. Control Room has extensive experience in live events and is responsible for, among others, the Live 8 series of free benefit concerts, and Live Earth 2007.

“We are honoured to have been selected by Fifa to organise and produce this first-ever event for the world’s largest sport,” said Wall. The 2010 concert will be the first Fifa-approved music event to take place on the eve of the World Cup.

While the traditional opening ceremony will still happen on 11 June, Fifa hopes that the music concert will attract the attention of younger fans, and draw them in to the excitement of one of the world’s biggest sporting events.

It is expected that the South African concert will have much the same feel as Live 8, which featured some of the world’s most popular entertainers, all giving their time for the sake of helping others less fortunate.

Fans can also look forward to guest appearances by football greats from past and present, as well as material from Fifa’s archives.

All proceeds from the concert will go towards 20 Centres for 2010, Fifa’s official legacy campaign for the football extravaganza. The goal of the project is to build 20 Football for Hope centres across Africa, five of which will be in South Africa, and the rest in other African countries.

Each centre will comprise an artificial football field made of one-star turf, with other services such as education and health care facilities, for the upliftment of the community.

The multi-use Orlando Stadium in Soweto, which re-opened in November 2008 after a US$38-million (R280-million) revamp, is to be the concert venue. Fifa and the organisers chose Soweto because of its strong symbolism for change in South Africa’s history. The stadium can accommodate a crowd of 50 000 people.

The three-hour music event, scheduled to start at 8pm local time, will also highlight South Africa’s vibrant cultural diversity, sporting prowess and visual appeal. The country is known for its rich musical culture as well as for its famed sporting achievements, and has produced many legendary artists such as Miriam Makeba, Johnny Clegg and Hugh Masekela.

Local Organising Committee CEO Danny Jordaan said, “There are few things in life that can kindle such widespread passion as football, but music is without doubt one of them. With this celebratory kick-off event, football fans are in for a huge treat.”

Artist names being tossed around include music diva Beyonce, rapper Jay-Z, and hip-hop group, the Black Eyed Peas. The official line-up, as well as details of how to obtain tickets, is to be announced at a later date.

“The plan is to make this the greatest live music event ever to come out of Africa,” said Wall in an October 2009 interview with Music Week. “We’re lining up some of the biggest stadium acts in the world to perform alongside African bands and artists, while the concert will emphasise the connection between music and sport.”

Wall added that the concert will break new records in terms of the number of countries tuned in.

“We’ve been working with Fifa for four months on this and we’re confident we’ll cover 99% of the footprint of broadcasters that are showing coverage of the World Cup itself,” he said. “We’ve already cleared all 54 countries in Africa to take the coverage on terrestrial TV, which is the first time that’s ever been achieved.”