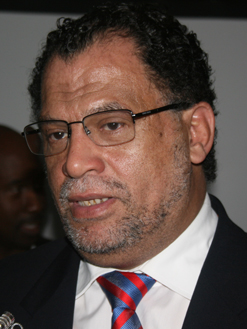 Local Organising Committee CEO Danny
Jordaan said the recent 2010 stadium
inspection tour showed that construction is
progressing well and plans are on track
for all facilities to be completed by the end
of 2009. 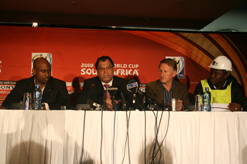 A countrywide inspection tour of the five newly built 2010 Fifa World Cup stadiums and the upgraded Soccer City stadium in Johannesburg has revealed that preparations are on track for all venues to be completed by the end of 2009.

The World Cup, which kicks off on 11 June 2010 for the first time ever on African soil, will be played out in 10 stadiums, in nine South African cities.

In addition to Soccer City, the existing stadiums which have been revamped for 2010 are Ellis Park Stadium in Johannesburg, Loftus Versfeld Stadium in Pretoria, Royal Bafokeng Stadium in Rustenburg and the Free State Stadium in Bloemfontein.

“This has been a very fruitful inspection tour for us,” said Local Organising Committee (LOC) chief competitions officer Derek Blanckensee, who led the team of 50 experts on the round trip along with Ron Delmont, head of Fifa’s South African office.

During the tour the delegates also inspected the team hotels and allocated training sites in each host city.

“Where before we had to visualise walls and seats, we now have been able to walk around freely in the stadium as it will be during the tournament,” Blanckensee added.

In most cases the physical construction of the stadiums is virtually complete, with almost all seats installed and pitches freshly laid.

“Overall we are very impressed with the achievements made. In addition to the stadiums coming together, we were equally pleased that the LOC, host cities and Fifa are working on a common vision on the delivery of the event,” said Delmont.

For the first time the inspection delegation also included a consultant from the South African Disability Alliance to oversee the provisions made for disabled spectators. Of the 650 527 tickets sold to date for next year’s tournament, 7 863 have been for wheelchair-bound fans.

Paying tribute to the host cities, LOC CEO Danny Jordaan said, “They have all done us proud. They have ensured that their wonderful new stadiums are built to the highest standards and are ready in time.

“The question has always been raised as to whether we will be ready. This tour has provided ample evidence that indeed we will be. Now the work of the LOC and Fifa begins in earnest as we take these stadiums and get them ready to host World Cup matches.”

This type of preparation entails setting up temporary infrastructure required to stage the tournament, such as stadium media centres, hospitality areas and accreditation centres.

“We can be happy as South Africa that we are in a good place now. In comparison to our own timelines as to where we should be, we are comfortable we have done very well,” Jordaan said.