One of the t-shirts available now
has the Kourage graphic on it. 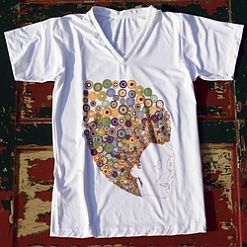 A Kenyan company has developed a local brand of sportswear for the country’s range of elite athletes, ensuring that when they compete internationally, their gear reflects a sense of national pride and commitment.

Kourage Athletics was launched in July 2011 and is the only athletics apparel company of its kind in Kenya.

Hussein Kurji, designer and head of operations for the company said: “There are a lot of Kenyan athletes and you always see them wearing Nike and Adidas, and not something from their own country.

“We do have quite a good track record when it comes to running, so why not match that with an equally big clothing brand?”

So far no major stars have been approached by the company to promote the brand, but it is hoped that in 10 to 20 years it will become their gear of choice.

For now, Kourage will associate with youth organisations with a focus on sport.

The company is the brainchild of Chris Markl, a professor of economics and political science at Florida State College in the US.

Markl said: “I always wondered why ‘ethical’ clothing lines were so focused on concentrating operations in America or Europe. There are incredible designers and entrepreneurs in impoverished countries.

“To create real economic development, an apparel company needs to create as many economic linkages in a poor country as possible.”

With every purchase of a Kourage garment, revenue is injected back into the Kenyan economy. This helps sustain jobs and create wealth for local communities.

Kourage also hopes to inspire entrepreneurship. Kurji said: “We hope the entrepreneurship spirit of Kourage will show other young talent that if you have the courage and perseverance, you can achieve what you want to.”

From Kenya, by Kenyans for the world

Kourage Athletics is designed, manufactured and managed in Kenya by locals, so by purchasing their apparel, one is investing in the Kenyan people.

Its clothing is produced at Viva Africa, a Kenyan-owned and -operated factory, which also produces other types of branded garments.

Viva Africa employs 200 people, the majority of whom are women.

Conditions at the factory are good, and the area in which employees work is kept well-lit and cool. They work 45-hour weeks with an hour-long lunch each day. They are also paid well above the country’s minimum wage, according to Markl.

Kourage garments are modern, fashionable and use the same type of quick-dry fabric that leading sports brands like Nike and Adidas use.

Kurji said: “We combine the fit of your favourite t-shirt with the best performance fabric in the world.

For the launch, 1 000 t-shirts were produced by the company with different graphics and designs.

The sportswear company is planning on increasing its line by adding hooded sweatshirts and running shorts, which it hopes will boost sales.

Markl spent 1 000 hours planning how to start the company, which included liaising with Kenyan factories, photographers and graphic designers.

Liaising took place over the internet and by phone as he is still based in the US.

Markl strategised in great detail before making his first trip to Kenya in 2009.

Once in Kenya, he met up with five entrepreneurs in their 20s and 30s, who are now Kourage’s key employees specialising in photography, fashion, production and graphics.