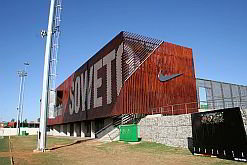 The Nike Football Training Centre in
Soweto is used as a training ground
by nearly 20 000 young footballers a
year and is also an HIV/Aids
educational centre.
(Image: Designboom) 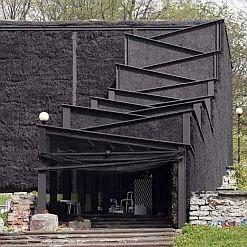 This theatre in Estonia is made from black
spray-painted straw bales and is in
competition with the Nike building in
Soweto for the 2011 World Building Award.
(Image: Dezeen Magazine)

The Nike Football Training Centre in Soweto in Johannesburg’s south-west, could become the second South African building to be named World Building of the Year, after making the shortlist for the award.

The facility is used as a training ground by nearly 20 000 young footballers every year and is also an HIV/Aids educational centre.

If it is crowned the World Building of the Year 2011, the centre will join Limpopo province’s Mapungubwe Interpretation Centre, the site of an ancient trading civilisation located in the Mapungubwe National Park. This structure won the award in 2009.

The Nike building is one of 704 entries from 59 countries competing for the annual World Architecture Festival Awards, which take place in Barcelona, Spain, from 2 – 4 November 2011.

The festival, described as the “world’s largest architectural meeting for architects, suppliers and clients”, culminates in the awards ceremony. This year’s event is the fourth edition, and has attracted the most entries since its inception.

There are three main sections: completed buildings, structural design and future projects. The South African entry is nominated in the first category.

Seruscka Naidoo, communications manager at Nike South Africa, said: “Nike is very proud and excited to be nominated for this prestigious international award.”

Naidoo said that the Nike building’s place on the shortlist is testimony to the world-class facilities it offers.

Rivals for the award include an office made of bamboo in India; Sweden’s Treehotel which takes the treehouse concept to new heights; and a straw-made theatre in Estonia.

The centre in the heart of Soweto

The football training centre was opened by then-mayor of Johannesburg, Amos Masondo, on 9 June 2010.

Sean Pearson, RUF director, said: “It is a world-class facility, with its design inspiration taken directly from the community of Soweto and the surroundings, and football.”

In its shape the rectangular building is similar to houses in the township, but is covered with wood-strip cladding, adorned with the Nike logo, that protects the interior from the sun yet lets in appropriate amounts of light.

The reception area is brimming with autographed photos, T-shirts and football boots of greats such as Ronaldo from Brazil. It also features a coffee shop and 10 Apple Mac computers for the use of visitors.

The first floor houses offices and the roof, fitted with synthetic grass, has a view of the two Fifa-approved pitches.

Mark Parker, president and CE of Nike Inc, said at the centre’s launch: “This football training centre will create a lasting legacy for the Soweto community and inspire the next generation of footballers by delivering premium football clinics combined with life skills programming.”

These factors, he said, would equip young people to live free of HIV.

The centre is part of Nike’s RED initiative which uses the power of sport to support young people in the fight with HIV/Aids in Africa. It does this through its Lace Up/Save Lives campaign.

Nike urges people to buy red shoelaces, giving sale proceeds to educational and medicinal programmes that tackle the disease across the continent.

Simply by buying the shoelaces one would have contributed to programmes such as Grassroots Soccer, which uses football as a framework to teach youngsters how to avoid contracting HIV/Aids, and to the Global Fund.

The fund supports the purchase of lifesaving antiretroviral medication, training of medical staff, HIV testing, and treatment to help prevent mother-to-child transmission of the virus.

Aaron Motsoaledi, South Africa’s minister of health, said at the centre’s opening: “Nike’s approach to combine football, education and medication is a powerful example of how sport can be used as a catalyst, enabling youth to make informed decisions and hopefully live a life free of HIV.”

The Lace Up/Save Lives campaign has to date generated more than US$135-million (R972-million) for the Global Fund.