South African Gift Ngoepe is a professional baseball player in the US and has been playing for the Minor League since 2008. 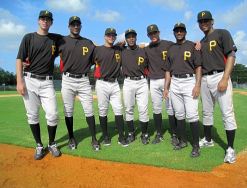 From growing up in a modest mud hut in rural Limpopo to living a single room with his family inside a Johannesburg baseball clubhouse, and later becoming the first black South African ever to sign a professional baseball contract,  Gift Ngoepe’s story is nothing short of extraordinary.

Ngoepe (22) was signed to the Pittsburgh Pirates in 2008 – and he is putting South Africa on the world baseball map.

Growing up on the field of dreams

As a child, a chance job opportunity for Ngoepe’s mother Maureen meant that the small family of three, including his brother Victor, had to move from Polokwane in Limpopo to stay in a single room at the clubhouse owned by the Randburg Mets Baseball Club in Johannesburg. Maureen was the clubhouse’s caretaker, in charge of cleaning and maintenance duties.

“We all slept in the room in the clubhouse,” says Ngoepe. “It was a small, but happy place.”

The sport star used to help his mother with some of her work, while he learned about baseball.

“I didn’t want to play other sports,” Ngoepe recalls. “I would watch ESPN until 2am and dream about playing in the Major League someday. I saw the national baseball team play at the field I grew up on, and it inspired me.”

He adds that he would continue playing by himself after dark when the others had gone home.

Noticing his interest in the sport, the Mets players would mentor Ngoepe on a daily basis, eventually adopting him as their protégé. He started off as the team’s mascot and waterboy, before being recognised as their most gifted young player.

The Mets raised funds for Ngoepe to represent South Africa in a tournament played in Mexico in 2005, and a year later in Cuba. He was about to take a life-changing trip in 2007.

Far from the clubhouse

Two years after Mexico, Ngoepe travelled to Italy, where he was invited to attend the Major League Baseball’s (MLB) annual three-week European Academy for promising international players. There he competed with players 10, 15 and even 20 years older than him.

MLB scouts present at the academy showed an interest in Ngoepe and in the second week, he received the news that the Pittsburgh Pirates wanted to sign him, making him the first African to sign with in MLB organisation.

Ngoepe also received a US$15 000 (R129 000) bonus from the Pirates after attending the academy.  In 2009 he again represented South Africa at that year’s World Baseball Classic in Taiwan.

Despite having to deal with racial discrimination in some countries, Ngoepe did not succumb to pressure and even went as far as to learn Spanish to make it easier to communicate with other players while in Mexico.

His manager Rick Magnante refers to Ngoepe as a legend, while Edwin Bennett, CEO of the South African Baseball Union, says the young man is ‘one of the many jewels found in South African sport’. Many who have played with him describe Ngoepe as an ‘energy guy’ because, they say, he brings positive energy to the game, even when morale is low.

“I’m a person who always believes in himself,” says Ngoepe, “I trust in people to believe in me.”

Despite baseball’s long history in South Africa, going back to 1895 according to Baseball South Africa (BSA), it is not as attractive as soccer, cricket and rugby, which remain the three most prominent codes in the country after many years. The national team is ranked 23rd in the world, and is the only African team in the sport’s top 40 countries.

According to BSA, there are 250 000 active players in organised baseball in South Africa.

“It is one of those sports that people don’t know about,” notes Ngoepe, “but once they get to play it they kind of enjoy it.

“If I tell people I play baseball, they are not convinced, and some of them have never heard of any of the teams.”

But he is determined to change that outlook, for the world and his country.

“I want to be the first from my country to play in the Major League,” says Ngoepe, who currently plays in the Minor League.