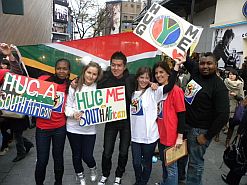 A group of South Africans living in Korea has started a project called Hug a South African to help promote the country in hosting Africa’s first Football World Cup in June.

The project is made up of ten individuals who set up South African national flags and banners, written South Africa 2010, in the busy streets of Seoul, the capital and largest city of South Korea.

They wear T-shirts with the Fifa 2010 World Cup logo and give out pamphlets that inform people about the World Cup. Some of them wear body boards, written Hug a South African, and hug any interested individuals that approach them. However all the individuals are responsible for warm hugs to the public.

The group also brings a few footballs with them, to let the people get a feel of what it is like to kick a one.

Vusi Ndlovu, one of the South Africans involved in the project, said the aim of the campaign is to dissolve the negativity and stigma some Africans face in many developing countries.

“I definitely believe we have come a long way, as a country and as a people. Being proud South Africans we have decided to contribute whatever or by whichever means possible, to ensure that our event [Fifa 2010 World Cup] is well known.”

Ndlovu said they are working closely with the South African embassy in Korea, which has agreed to supply them with more resources.

“We do not wish for any financial funding. We are doing this willingly and will use our own finance for the trips and all related matters. Our aim is to show the other South African people out there that you can help support your country with minimum resources available,” he said.

The campaign, which kicked off in December 2009, has been well received by locals in Korea. Many stop to receive hugs and take pictures with the group.

“The locals have been getting quite involved. They take pictures of us to share with their friends and family. This also insures the promotion will continue beyond our campaign,” said Ndlovu.

South Africans living in other countries have also welcomed the project and are working on setting it up where they are currently residing.

Michelle Pearce, a South African living in Japan, has been coordinating with South Africans in the Kansai region to start a campaign. Kansai is in the southern-central region of Japan’s main island Honshū.

Pearce said they have recently received confirmation from the South African embassy in Japan that they support the campaign and are willing to help the venture on any level.

Daniel Rossouw, living in the United States, said he is also trying to round up South Africans living in Florida, in the southeastern region of the US, to start the campaign there. “I think this is a great campaign; it encourages pride in our country. It also helps with promoting our country and this big event [Fifa 2010 World Cup]. It’s great to do something for your country.”