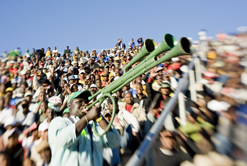 Even the loudest vuvuzelas will not
compromise the state-of-the-art sound
system to be installed at all 2010 match
stadiums.
(Image: Chris Kirchhoff,
Mediaclubsouthafrica.com.  For more free
photos, visit the image library.)

Soccer lovers at the Fifa 2010 World Cup matches will experience a stadium sound sensation thanks to new state-of-the-art audio systems.

Prosound, the company commissioned with integrating the sound systems at the venues for the matches, says even the loudest vuvuzelas won’t be a match to the clarity of the sound to be produced at the stadiums.

Grant Scott, head systems engineer at Prosound, says he has already worked on nine match and practice stadiums, including Orlando Stadium in Soweto, which was reopened last year after undergoing major refurbishments for the tournament.

“Orlando is not completely done and dusted, although the opening games went well; Loftus [Versfeld stadium in Pretoria] is 90% complete, Bloemfontein and Ellis Park are also quite far advanced,” said Scott.

Other stadiums he has worked on include the Royal Bafokeng stadium in North West, Ellis Park in Johannesburg, Mbombela in  Mpumalanga, Nelson Mandela Bay stadium in the Eastern Cape and Green Point stadium in Cape Town.

Scott is confident that by the times the stadiums are given a clean bill of health at the end of this year, the sound will be crisp and ready.

“I think we’re going to do it. We’re South African – we did it with the cricket, we did it with the rugby. I’m confident we will get there. The Confederations Cup stadiums that we are busy with are in a pretty good state of readiness.”

“There were no problems at the German World Cup, and hopefully there will be none here. The integration of modern sound systems is so seamless there shouldn’t be any problems,” he says.

Meanwhile, South Africa’s Department of Home Affairs has announced that it will institute a special “event visa” that will allow thousands of expected soccer fans from around the world to enter the country easily during the Fifa 2010 World Cup.

Special counters at airports around the world will be set up to allow soccer fans to have pre-clearance before they arrive in South Africa. The counters will ease up the traffic flow at the international arrivals terminals.

On 9 December 2008, Home Affairs Minister Nosiviwe Mapisa-Nqakula said this would be the first time that such a visa will be used by a country hosting a major world event.

“These visas will be used for both the Fifa Confederations Cup and 2010 World Cup.”

Foreigners applying for the event visa will go through a pre-screening and pre-clearance process at selected ports of entry. The visa will be free of charge.

South African immigration officials will be stationed at several of the world’s busiest airports including the United Kingdom, Dubai, India and Hong Kong.

All of the officials will be customer service trained volunteers and will be able to speak various foreign languages, depending on where they will be placed.

Passengers who are granted pre-clearance by South African immigration officials, will then be able to arrive in South Africa and go straight through to baggage collection and then customs.

The establishment of this system comes in response to complaints by those arriving in South Africa that the immigration processes were slow and that officials were not professional in their conduct.

Minister Mapisa-Nqakula says this was an issue that had been given serious consideration and a recruitment and training programme had been undertaken to ensure enough officials are on hand at South Africa’s ports of entry.

The recruitment and intensive training, forms part of the department’s strategy aimed at unleashing a breath of fresh air into the immigration services, as well as enhancing the department’s capacity.

The training programme has already produced its first set of graduates, with the graduation ceremony attended by the minister.

To further speed up the time at visitors spend at customs, immigration officials will also be equipped with high-tech devices.

The devices will be able to scan passports or travel documents, and the information will reflect electronically on their computers. This will save officials the time of typing out the information.

The department also hopes to decrease the interaction time between the traveller and the immigration official to between a minute and a minute and a half.

Despite the relative ease with which foreigners coming for the soccer events will be able to access South Africa, security will be tightened at all entry points.

Immigration officials will be working closely with foreign governments and airline personnel to identify passengers with irregular migration patterns, and those who might pose a national security risk to the country during the course of the events.

Programme manager for the Home Affairs department’s 2010 programme Morne Fourie says there will be certain minimum requirements which foreigners have to meet when applying for a special visa.

“You would need proof of purchase of your ticket for the match, meet certain health requirements like holding a yellow fever certificate, have a return ticket and a valid passport.”